A Love Affair With A Cat 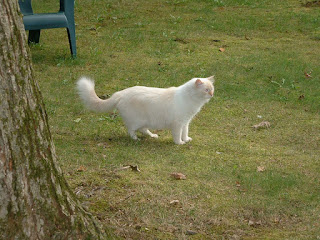 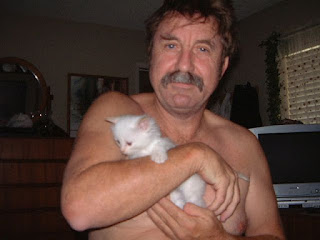 We have an old little dog and an even older tomcat. Neither one will live forever, and I’m not looking forward to the inevitable. I’m really not. The tomcat’s name is Quigley, the little dog is Lil. Quigley has been with me longer than my wife has. He was always a ferocious and independent cat. Did not tolerate people well. None of them, with a single exception—me. He was always my companion. Can’t really call him “my” cat, because he simply wasn’t built that way. He’s a white Rag-Doll, large in size and powerfully built. He came into my life some 17 years ago as a kitten, barely old enough to be taken from his mother. As a baby, he slept with me, usually wrapping himself around my head, where I’d find him in the mornings. As he got older, he became a bit more distant. Like I said, he was powerfully built. As an adult, from a standing start, he could leap over a four foot fence in a single bound, land on all four feet, and never make a sound doing it. When he performed such a leap, it was like he floated. He had what I called “hang time”. It was beautiful.

When he came into my life, I lived in Bakersfield, and he was brought into this world by a cat breeder in Santa Clarita, California. A few years later, I had become married, and we made a move to Youngstown, Ohio. Quigley rode all the way out there in the back seat of my Explorer. While living in Youngstown, we bought a house on the edge of Mill Creek Park, a very large and diverse place. Wildlife included aquatic mammals like beaver and otters, groundhogs, foxes, raccoons, deer, and the occasional bear. Quigley considered Mill Creek park part of his personal territory, and defended it.

Every spring, before the snow melted, Quigley would go hunting in our front yard for the rodents that were starting to have some activity. He was a tundra-hunter. Savage, courageous, independent, and beautiful with his white fur bushed out and his blue eyes. I’d find the headless bodies of moles, mice, and other unknown rodentia near the front door. Although I never really witnessed it, I always believed that Quigley preferred to eat the crunchy part, and leave the rest for someone else.

On one of those mornings, I got a phone call from Chuck, my neighbor across the street, inquiring if I knew what Quigley was up to in the yard. I looked outside and saw that he was rolling around on his back in the snow repeatedly picking up something with his paws, tossing it into the air above him, and then smacking it away. Then repeating. I went out and found that he was, indeed playing with his food. He’d caught a mole, and the mole was paying the price.

When we left Ohio and came to Castle Rock, it was a new place for Quigley. He established, once again, that he was the baddest tomcat in the area. He maintained a tight control over the area. That was 6-7 years ago.

Here’s the sad part, at least for me. About 4 or 5 months ago, Quigley’s behavior changed dramatically and substantially. He became a full-time lap cat. He doesn’t go outside anymore. He can barely leap enough to get into my lap. He’s lost easily half of his body weight. He can’t properly groom himself anymore. Sometimes he forgets where to crap. He throws up a lot.

I know what all this means, but I’ve never had this long of a relationship with a cat. I wonder if a cat has any sort of awareness as to who he is and where he stands in the family. He’s still my boy, and the two of us know that. I just hope that he makes it until Spring. He always loved early Spring the best.

I’ll keep babying him until it looks like he’s always in pain, or if his kidneys fail. A fine, tough, strong tomcat, wracked with the ravages of time. I’m not looking forward to that day at all.

I’ll write about the old dog on another day. It’s also a love story that covers quite a few years.