Showing posts from October, 2011
Show all

October 30, 2011
I’m headed off on an adventure on the third of November.   But, I’m an adventuresome sort.  I’ll be headed to Colorado to visit my daughter Helen, her husband Geoff, and their four girls for a couple of weeks. It’s the slow season at the driving school, and this time of year works out well.  I’ll be home for Thanksgiving, but I needed to vote absentee because I’ll be gone on Election Day.  And, here in Ohio, I needed to cast my vote for Issue 2.  As an elected member of the Mahoning County Central Republican Committee, I can do no less.  I’ll also be gone on Veteran’s Day, so I’ll watch war movies with my daughter. I’m certain that I’ll have a grand time. Why is it an adventure, you ask?  I don’t care much for flying.  Trains are too expensive.  So, I’ll take the Greyhound, and leave the driving to them.  I did this last year too.  On all of those Internet Bitch Boards, people hammer Greyhound bus service, but I thought it was fun—Except for the part where we were snowed
Post a Comment
Read more

October 20, 2011
Just so there's no misunderstanding in the future--If you tailgate me, I'll slow down.  To a crawl, if necessary.  I don't do this to irritate you.....I consider that a bonus.
Post a Comment
Read more

October 18, 2011
I bought a nearly new 1995 Ford Explorer in 1995.   It’s been the most reliable, dependable car I’ve ever owned.   Never gave me any cause to curse it.   Bought it at Hansel Ford in Santa Rosa, California. All I ever did to it was have the oil changed regularly, and gas it up on occasion.   It’s got 180,000 miles on it and has taken me from the mountains to the desert, from California to Ohio, and so very many stops in between. It’s been running a little rough of late, and the A/C is on the fritz, so I took it into a shop and found out (the details of the troubles are somewhat beyond me) that it’s finished.   It’ll cost at least $2000.00 to get it back into shape, and it’s just not worth that much.   Even with the new tires I had put on it last year. I guess getting 16 good trouble-free years out of a car is more than you can really expect, but I was beginning to think it would out last me.   I don’t think I’ll ever get another car/truck/SUV/crossover/whatever that will be
Post a Comment
Read more

October 11, 2011
I try to keep up.  So I read that Moonbeam Brown, the once and current Guv'ner of California, has been busy signing bills into law.  Always good for a comment or two. Two of the bills that are now California law run something like this, and they were signed by Moonbeam on the same day: 1)  Children as young as 12 can now be prescribed certain STD medicines without parental consent, and, 2)  Children under the age of 18 are now prohibited from tanning in tanning beds. Just so I have the concept straight, here's the apparent bottom line--If your 12 year old daughter is screwing everything that walks on two feet and shaves, it's none of your business, but if your 17 year old daughter wants to get tanned in a booth in preparation for the  Senior Prom, the State of California will step in, act as a protective parent, and prohibit it. As Ricky said to Lucy....."You gots some 'splaining to do". No wonder I fled California like a scalded cat.
Post a Comment
Read more

Fall Is Upon Us 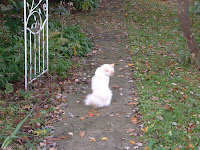 Overnight--literally--the Autumn colors have arrived.  Beautiful time of year here. Even in the Fall, the white cat does not change color. Like the sign says, Welcome. From our front porch. The house, from the street. Our entrance to Mill Creek Park--The dead end of Ottawa Drive. Our gazebo in the front yard.
Post a Comment
Read more

If I owned the Colorado Rockies………………

October 09, 2011
If I owned that mile high franchise, the uniforms would have flying squirrels on the chest. There would be “Where Is Moose?” day instead of free refrigerator magnet day. Every time a home run was hit, the big TV screen would show Dudley Do-Right galloping across the screen backwards. We’d have a grand time with Fractured Fairy Tale Night at the ballpark. Everyone would come for a trip down memory lane in the Way Back Machine. The team mascot would be accompanied on occasion by Boris and Natasha.  And Mister Big. Relief pitchers would warm up in the Bullwinkle Pen. Everyone would tune in next time for Game 38, or, “How We Blew a 9 Run Lead in the 7 th Inning”. Uniform numbers would always include a fraction.  The umpire would always be called Snidely Whiplash.
Post a Comment
Read more

October 09, 2011
I’ve been thinking that I really ought to write something about the idiot protesters that form Occupy Wall Street, and all their progeny, including those morons who decided to occupy the DC Air & Space Museum because it had an exhibit of a Drone (let’s have a museum, but let’s change what’s in it to suit our “vision” of what the world ought to be like)—sort of like editing Bogart movies to remove the cigarettes because they’re so, um, icky. But I lived through the 60s as a military policeman, and the 70s as a civilian policeman, so I changed my mind.    Since I’ve been there and done that.
Post a Comment
Read more

Unclear on the Concept, a Clear Winner

October 09, 2011
I’m not certain that everything isn’t going to fall apart.   In the sense that we’ll have to fend for ourselves for some period of time.   You know what I mean.   Don’t you? Anyhow, I’m on Amazon.com and added to my basket a copy of “When All Hell Breaks Loose: Stuff You Need To Survive When Disaster Strikes”.   Don’t laugh.   It’s the Boy Scout in me. So I add the book.   Then I notice that it’s also available in a Kindle Edition.
Post a Comment
Read more

October 04, 2011
I’ve never been much of a Hank Williams Jr. fan.   Sure, he had a couple of tunes that gave me happy feet, but that was about it.   Don’t get me wrong—I have no grief with his music, and I like lots of Country & Western—just not a big Hank fan, OK? Not that much into the current NFL either.   There was a time, but for me, that time is past.   The last time I actually looked forward to and watched a Monday Night Football game, it was still on ABC.   Actually, I don’t watch much ABC anymore either.   Not that I’ve got anything against ABC either…..The last time I actually remember tuning in to a Monday Night Football game, the hosts were Howard Cosell, Frank Gifford, and Dandy Don.   Now THAT was a broadcast team. What brings up this remembrance is this:   ESPN now runs (or owns—whatever) Monday Night Football.   Hank Williams has the signature tune for Monday Night Football—you know the one.   It contains the phrase “Are you ready for some football?!!”.   Yep, that one
Post a Comment
Read more
More posts