Showing posts from February, 2020
Show all

February 25, 2020
It’s a sad season for fans of the SF Giants. Sad. I have no idea who these guys are—I read that they have employed 17 big-league coaches. Jeebus...17 coaches. The general behavior of the club is the same as an expansion club that’s trying to decide who it wants to be when it grows up. I also read that they’ve signed so many players and coaches that they’ve run out of jersey numbers and have issued “0” and “00”. Now, I don’t know if all that’s true, but I do read the McCovey Chronicles, and one of their pieces on the web site this week is entitled “ Which Fictional Character Do You Want To Manage The Giants?”. So it’s not just me. Fictional Character to manage? One of their suggestions was Elle Woods, and I think that’s just dandy. E ven at that, baseball in general is in trouble…..Currently over-regulated and over-sanitized with way too many “metrics” . Players are over-paid causing ticket prices to rise out of the range for a regular guy (such as myself) to go to game
Post a Comment
Read more 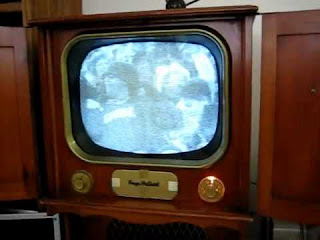 When I was in high school, I had a pretty full plate—In addition to actual classes (which were the least important part of it), I had extracurricular activities including athletic teams, the band, occasional dalliances with clubs like the California Scholarship Federation and the Key Club, I also had a nearly full-time job at a gas station and other summer jobs. And girls. And beer. And a car. The jobs supported the car, the beer, and, mostly, the girls. It was a full life. And fun. That covered the years from 1963 to 1967. No time for television. Ever. My Dad had a Kaye-Halbert B&W console TV—From my perspective, it was a blond wood cabinet that occupied a corner of the living room near the fireplace. I don’t remember ever sitting down and watching TV. Too much life to live, even when I was a little kid. Bike rides. Friends. Baseball.  Cub Scouts.  Sneaking a cigarette sometimes. My only point here is that TV wasn’t important in my life. Not just “not
Post a Comment
Read more 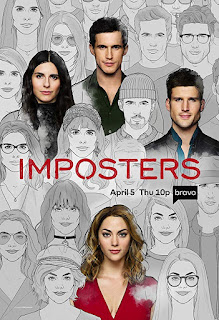 Watched the entire 2 season run of “Imposters”--In the current manner, that would be 10 episodes per season. All on Netflix. This is one of those truncated canceled for no good reason really grand TV programs that I have been becoming affectionate of. Christ, that sentence is a disaster….. Imposters was made as a “Scripted Bravo Program” (their words on the opening screen of every episode)--As opposed, I suppose, to another baking competition that would be, at least by their standards, “Unscripted”….Even though we all know that they are indeed, scripted and planned. What those programs don’t have, however, is much overhead—No real writers or directors or hot new actors. Stuff like that. Plots. Original ideas. Location shoots. You know what I mean. This is one of those programs where you watch the first episode and think Oh Shit—This is too good for TV. It’s doomed. And you’re never really wrong. Happens all the time. Life on Mars. Life. The Unusuals. Brim
Post a Comment
Read more
More posts