Showing posts from August, 2011
Show all

August 27, 2011
What one person receives without working for, another person must work for without receiving.
Post a Comment
Read more

August 27, 2011
Tax Freedom Day (http://www.taxfoundation.org/taxfreedomday/) is the day when the average American has earned enough money to pay his federal, state, and local obligations for the year.  This year, 2011, that date was April 12th, the 102d day of the year.
Post a Comment
Read more

August 27, 2011
The government cannot give to anybody anything that the government does not first take from somebody else.
Post a Comment
Read more

August 25, 2011
We thought TV was going to hell back in the 60’s and 70’s—HeeHaw, Room 222, Gilligan’s Island, the Brady Bunch, Hullabaloo—and all the rest.  We were wrong.  Those were the Good Ol’ Days with quality programming and commercials that made sense—Buy some smokes and liquor.  Those ads have been replaced by ambulance chasing lawyers and prescription drugs.  Frankly, I preferred the smokes and liquor. Then there’s the actual programming.  Back in those Good Ol’ days, we had channels with numbers.  Like this:  Channel 2, Channel 3, Channel 4, and so on.  Now we have channels with names.  Like this:  MTV (Music Television), History, Video Hits, Arts & Entertainment…..You get the picture.  My guess here is that when these channels were named, the name of the channel was supposed to have something to do with the actual programming.  But that’s only a guess.  Because, here’s what I found available on my cable TV channels at noon, on Thursday, 8-25-2011: -MTV was showing an episode of Jerse
Post a Comment
Read more

August 24, 2011
I read that the federal government is mortified to find out that food stamp recipients are buying bottled water with their food stamp benefits, then pouring out the water and returning the empties for cash in those states where the empties are worth something.  The government plans to enact a new rule prohibiting the practice, then assign professional investigators to look into how to address this problem. I get so tired of having to point out the obvious (actually, my step-son Cale has referred to me on occasion, as, ahem, Captain Obvious), but someone must take this proverbial bull by his horns.  Why are food stamp recipients allowed to purchase BOTTLED WATER with their benefits?  This is money that comes out of my personal pocket.  I drink tap water because bottled water is a waste of money.  Welfare recipients can do the same. Problem solved. You’re welcome.
Post a Comment
Read more 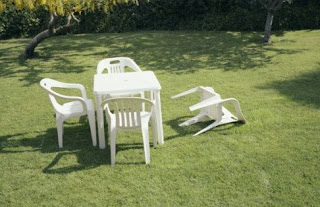 I may or may not have mentioned that I lived the lion's share of my life in California.  You know, beaches, mountains, the Governator, Hollywood, Disneyland, earthquakes.  I've been pretty close to a number of earthquakes.  The first one that I recall really well occurred when I was in the 7th grade at Healdsburg Junior High.  I was on the second floor in math class.  Our desks were hooked together in groups of three or four by means of rails on the bottom.  I sat at the beginning of one of the railed together groups, and at the rear end of my group was Ralph Pavoni, a notorious prankster whose father was the Fire Chief.  Not that that has anything to do with what occurred, but, well, he WAS the Fire Chief's kid..... There I was, working my 7th grade algebra when my desk started wobbling back and forth wildly--I immediately turned about and shot a look at Ralph, figuring that he was responsible for the long dark pencil mark that was made across my paper at the moment of t
2 comments
Read more

When you drive a "green" car, you're entitled to park wherever you like.  It's in your contract from Toyota. Very Smug
Post a Comment
Read more

August 15, 2011
Dear World-- Stop freaking out about 2012.  Our calendars end there because some Spanish dirtbags invaded our country and we got a little busy, OK? Sincerely, The Mayans
Post a Comment
Read more

August 14, 2011
Dear Noah-- We could have sworn you said the Ark wasn't leaving until 5. Sincerely, The Unicorns
Post a Comment
Read more

August 07, 2011
I have a Hotmail account.  I've had it for a very long time--since before Microsoft amoeba'd Hotmail.  I don't use it for very much, but I stop by once in a while to empty my in-box and clean things up.  When I exit my Hotmail account, I am automatically taken to an MSN site with, oh, celebrity junk and other stuff.  A genuine crap-fest of idiocy that I usually pass on.  Today I took a look at a feature they had called "Did They Forgive", a total of 17 wrongs in need of righting, in honor of, and I can just barely spit this one out--International Forgiveness Day.  So I breezed through them, and here's the brief run-down: -Number one was, of course, the ever newsworthy Brad Pitt/Jennifer Aniston thingie. -There was one terrorist attack in need of forgiveness. -One was a little girl who was bitten by a shark. Then it gets interesting..... -There were 4 instances of black people needing forgiveness from other blacks. -5 on blacks in need of forgiveness fr
2 comments
Read more

Spot The Cat entered my life from the Sonoma County California Humane Society on January 12th, 1999. She was my buddy and my companion through every move I made.  She moved with me from house to house in Santa Rosa, California, and on to Bakersfield, California.  Later to Youngstown, Ohio. For the past year or so, her eyesight has been failing and she had been getting frail.  She chose to live in the basement where I made a daily visit to clean her litter box, open a can of food for her, change her water dish, and give her a pat on the head and a scratch on the back.  She was always ever so polite, mewing a gentle greeting every morning. This morning, there was no greeting, and the litter box was unused.  Her food dish was not touched. I found her lifeless body in a corner of the basement, curled up, asleep for eternity.  She was a good cat. I have other cats, but here will never be another Spot The Cat. Spot The Cat
Post a Comment
Read more
More posts