I thought it would last forever. I never anticipated that it would end like the other times, leaving my heart broken and so very, very alone. This was the one that would stand the test of time. It will never end.

8 years. 149 episodes of Joe, Helen, Brian, Lowell, Antonio, Fay, Casey and Roy. Gone now. Just like Scully and Mulder, James T. Kirk, Ezekiel Stone, and the WKRP crew. Forever living in my memory, but no longer on the small screen. I can watch them again (and I will) but it’s not the same as the first time.

On the other hand, Netflix beckons with the promise of something permanent. Lasting.

Oh, who am I kidding? I’ll try again, and wait for the inevitable hopeless feeling of loss at the end of the road.

But the ride is always worth it.

In all seriousness though—A TV series that you really like is unique. It’s populated with people who you invite into your home and into your life on a regular basis. Characters, to be sure, but friends too. And when they are gone, all you have left is the memory of what was, and the wonder what might have been. I miss getting a glimpse into their lives.

Now that Wings has run it’s course, I’ll miss them but the void won’t last very long. It will be replaced by something else. New characters to invite into my living room.

When Wings was on TV originally, I was a pretty busy boy and only saw an episode or two from time to time, but enjoyed it—now that I’ve seen the entire series, front to end, in order, it was really special—like some others. The writers wrapped it up nicely, and made me get emotional at the end. 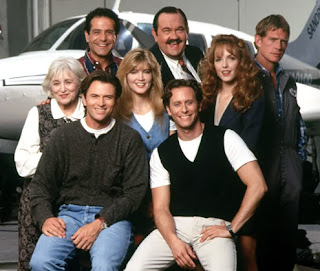