Battle Beyond The Sun

Another bout of insomnia and the net result is another public domain movie courtesy of Pub-D-Hub, one of my favorite TV channels.  You can always check them out at pubdhub.info, then have a look on your HD TV through your ROKU box.  Yeah.....cable is so last week.

Battle Beyond The Sun  is an American International Film--In this case, that means that this is a Russian Movie (originally titled “Nebo Zovit”--I know, I know, what’s that mean to your average American?  It translates to “The Sky Is Calling”, more or less, but in part I’m guessing here), purchased by one of our favorites here at Movie Notes, none other than Roger Corman.  The original movie was about 2 hours long and made in 1960.  Roger got his hands on it somewhere around 1962, hired a relatively unknown film school student named, ahem, Francis Ford Coppola to Americanize it and get it all dubbed up, then re-released it as Battle Beyond The Sun, barely longer than an hour.

Now, that’s what I call Capitalism.

The original story was about people living in peace and harmony and working together for common goals in the best Cold War Russkie traditions, and some other high-falootin’ idealistic horse-stuff, but Roger’s final product is a little different.

One of the things about all science fiction of the era is that they shoved in some science with the fiction, and I appreciate that even if the SyFy channel has forgotten.  Or never knew.  So we start with the beginning of the story being in the far future of 1997, after the nuclear exchanges between the USSR and the USA.  Actually, back in 1960, we all knew that there would be a WWIII with us and the Reds lobbing nukes at one another.  We KNEW it.  There were lots of stories about how it would happen, and plenty of PSA and such about how to survive a nuclear attack.

The rest of the story is a little fragmented, but the main crux is that a some space men wind up on a rocky asteroid where a couple of monsters a battling it out.  For what we don’t know.  For why we don’t know either, but that’s all irrelevant, because Roger had the monsters made up to resemble male and female genitalia.

So the Battle Beyond The Sun is on a rocky asteroid between a giant penis and a giant vagina.  We don’t know who won, but that’s also irrelevant.

Not a complete waste of time.  I enjoyed the ride.  One and a half stars.  Have a look. 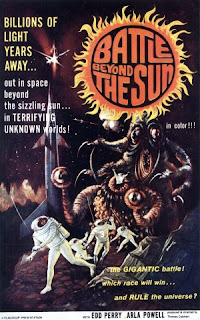 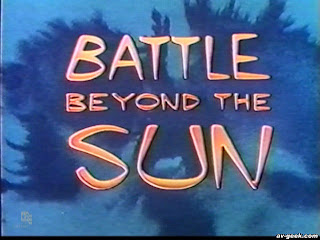