I may have mentioned that my wife is away. Leaves me with time on my hands, and you probably know by now what that means.....

Television Notes from the Rust Belt.....

Over the past two days I watched Harper's Island in it's entirety. All 13 one hour episodes.

This one season adventure was listed on Netflix as a murder mystery/thriller set on an island off the Washington coast. After watching a couple of episodes, it became clear that there were to be lots of girls in underwear, grisly murders of every possible stripe, plenty of 20-somethings making out, and it was all set in groovy happenin' Pacific Northwest. Conspicuous by it's absence, however, was any reference to Starbucks or Grunge music. I guess that's because it was really filmed in Canada, and the Canadians are far too polite to like either of those two offspring of Seattle. The only bit of pop culture that seems to have been omitted was, thankfully, vampires.

Like I said, this was thirteen hours of programming, but based on my viewing, they actually had about an hour and a half, maybe two hours tops, of actual story. Here's how it breaks down:
-Since I watched it on Netflix without commercials, Each episode was 40 minutes.
-Each episode starts with an introduction and “what happened last week (or weeks)” for 10 minutes.
-Long gratuitous make-out scenes, close-ups of faces, long chases ending in death, and other time wasters (like extended scenes of girls in underwear) eats up an addition 15 or 20 minutes per episode.

So we get an actual 10 or 15 minutes of story continuation per episode. Works out OK for me, but I have no idea how the brain trust managed to sell this to CBS—this is more like a SYFY or TLC presentation. I'm pretty sure that the production company saved on costs by killing off vast numbers of the cast every week.

I could point out the holes in the plot, but I'll leave that for the critics, because I'm not a critic.....I'm a fan. Of TV, Movies, and all things screen. If you haven't already noticed.

We got Elaine Cassidy, originally from Ireland, as Abby Mills, Christopher Gorham , who used to be Jake 2.0, and then went on to be Auggie Anderson in Covert Affairs as Henry Dunn, CJ Thomason (Lucas Jones of General Hospital) as Jimmy Mance, Jim Beaver of Deadwood as the Sheriff, Callum Keith Rennie of Merrie Olde England as the Really Bad Guy, and a host of others.

Not too much plot to get in the way of the story here, and despite being hammered by the critics and viewing public alike, I liked the story, plot holes and all. At the end of the day, it was a love story filmed in a beautiful location—a twisted love story to be sure, but I'm a sucker for a love story. The final scenes gave me chills.

Not a complete waste of time—Have a look. 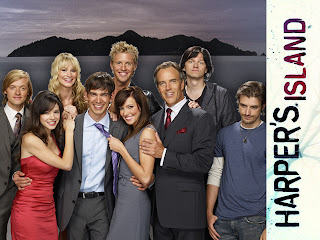