How a movie that starts out with the final out of the final game of the 1960 World Series, features Andie MacDowell, Liam Neeson, and Viggo Mortenson, then is filmed on location in Athens, Berlin, Cairo, Veracruz, and, um...El Lay, could suck this badly is impossible for me to describe adequately...........but it did.

I caught this 1993 hour and a half disaster on Netflix. It goes by two names. Not a bad idea for most criminals, and this movie fits the bill. You can call it Deception, or you can call it Ruby Cairo, but I call it dung on a stick.

Can't really say what the story was—seems Viggo is a thief or an arms dealer or something and fakes his own death, and then his wife (Andie) tracks him down through several countries while falling in love with Liam. Then there's a fiesta and a game of street baseball. Fade to black.....show the credits.

The high points are Andie MacDowell showering—no, you don't get to see anything. C'mon—USE YOUR IMAGINATION, and the aforementioned World Series.

Tiring, trite and boring don't go nearly far enough.  All I can figure is that the whole thing was some sort of tax dodge, or Andie wanted to see Cairo before the Muslim Brotherhood takes over.

A complete waste of time. Don't bother. Thank God I didn't pay to see this stinker at the theater. 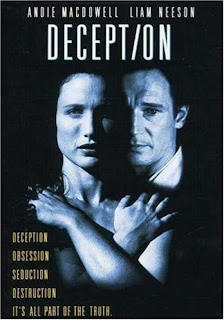 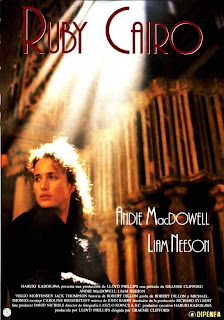