It's over 90 degrees American here in Northeast Ohio. That's only 35 degrees European, but I couldn't care less about the European ways of doing things. What's a Euro anyhow? They don't seem to know in Greece either, so you're forgiven.

Had a look-see at a 1980 movie titled Hanger 18 this afternoon, courtesy of Netflix. Not an excessive amount of story here, and plenty of action. A straight sci-fi offering of the time, complete with corrupt politicians, heroic NASA pilots, and a moral ending. We got space aliens who happen to look a lot like us, and, as luck would have it, their ancestors fathered our ancestors by co-mingling their essential juices with the tribal women-folk oh, those many years ago.

We have a space-walk decapitation in the opening sequence, and it just gets better as the movie rolls along. The corrupt politicians in the White House all seem to be wearing pastel pin-stripes, so they must have been Democrats. If memory serves, the Republicans of that time period dressed much more severely. But it coulda gone either way.

The cast is simply chock full of all the regulars—You got Gary Collins (of Love American Style and so much more) and James Hampton (also of Love American Style, but I'll always know him as the Were-Dad in Teen Wolf) as the heroic NASA guys, Darrin McGavin (AKA Kolchak) as their boss, former Man From U.N.C.L.E. Robert Vaughn as the main White House baddie, and the list could go on forever. EVERYBODY was in it.

The set-up and cast was pretty darn good, and I don't mind saying that Chris Carter probably watched this movie just before he dreamed up the X-Files.

Oh, and about that title—Hanger 18 is the building at Wright-Patterson AFB where the Roswell UFO is supposedly housed.

Darn good way to kill and hour and a half on a muggy afternoon—Have a look. 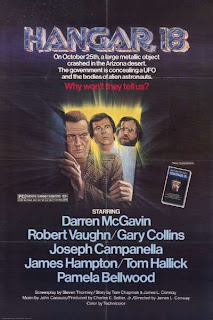