The Last Woman On Earth

The Last Woman On Earth is a movie. No, I don't mean an “A” movie. Actually I don't mean a “B” movie either. It's a different sorta movie.....A Roger Corman Movie. From 1960. In glorious black and white. I caught this public domain movie on PubDHub streaming through my beloved ROKU box, but you can also buy a copy on DVD if you want, and then you'll get a DVD cover emblazoned with the full color graphic seen here. 'Course, the graphic has nothing to do with the movie—well, there's no nudity or partial nudity of the female lead, and there's no knife fight between the men. Still, a very cool DVD cover. The picture of the trio is from this movie—in other words, what these actors REALLY looked like.

A straight end-of-the-world flick here. Powerful businessman and his wife are vacationing in Puerto Rico, and are joined by their lawyer. They go to the aforementioned Cock Fight, then go scuba diving, only to find out, when they surface, that there has somehow been an interruption in the oxygen content of the Earth's atmosphere while they were under water. Yep—they are the only survivors. Two men and one woman. And you know what that means.....the OTHER sort of Cock Fight. The one that you thought I was talking about before.

Only three actors in this movie:
1)Betsy Jones-Moreland, who started out as a secretary for the production company of the Howdy Doody TV show in the 50s and who later was Judge Elinor Harrelson in a series of early 90s Perry Mason TV movies. She played the female that the men want. 'Cause she is, like the title says, the last woman on earth.
2)Italian native Antony Carbone as the cuckolded businessman husband. He also starred in 1959s A Bucket Of Blood, 1961s Creature From The Haunted Sea, and 1961s Pit and the Pendulum. He did plenty of TV in the 70s and 80s, but “B” grade sci-fi/horror was his calling.
3)Robert Towne wrote and acted (as the lawyer who tries to steal the wife) in this movie. But he's really a writer. His writing credits include Tequila Sunrise, The Two Jakes, Pompeii, Days of Thunder, and many, many more.

There you have it. Two men, one woman. Only one way this can end, and that's how it ended. Perfectly good way to kill an hour and a half. And a lawyer who's been messin' around with your wife. 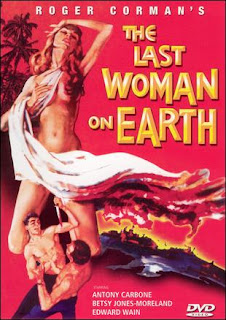 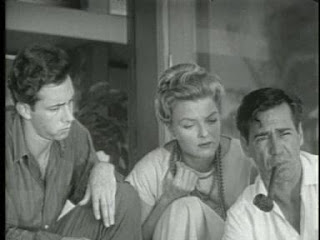