OK then--in 1915, the Supreme Court of the United States held (Mutual Film Corporation v. Industrial Commission of Ohio) that free speech rights did not extend to motion pictures.  This decision was in effect, and was the law of the land, until it was overturned by that same body in 1952 (Joseph Burstyn, Inc. v. Wilson).

As a practical matter, then, government could censor the content of motion pictures during that time period.  And they did.  With a variety of government entities prohibiting this and that, in a typical American patchwork of idiocy.

The so-called Hays Code was enacted by the motion picture people in Hollywood as a self-regulating set of guidelines to answer the moral and ethical questions of “talkie” motion pictures of the 20s and 30s.  Interestingly, this was during the same time period that baseball became self-regulating with the appointment of Kenesaw Mountain Landis as baseball commissioner after the Black Sox scandal of 1919.  But that’s a story for another day.

Reefer Madness (AKA Tell Your Children), the popularized cautionary tale, and it’s brother, Marihuana (AKA Assassin of Youth) were both released in 1936.  I own a copy of Reefer, and have recently enjoyed a viewing of Marihuana on the Movie Vault channel streamed through my beloved ROKU box.  Both of these movies have been popularized as propaganda films about the evils of weed, and are frequently described as “cautionary tales”.  And there’s some truth to those descriptions, but I see it a little differently.

These movies were made so that a mainstream movie (of that time period) could be released to the theaters (and a buck or two made) that contained some nudity that would skirt the Hays Code.

The female lead in Marihuana is a character named Burma Roberts, played by the songwriter Harley Wood in one of her few movie roles.  The male lead is played by Scotland native Hugh McArthur, whose movie acting career ends in the 30s.

Not too much plot to get in the way of the all-girl skinny-dipping scenes here--Nice girl smokes weed and gets pregnant, gives up child to adoption, becomes major drug dealer, dies early as a result of her choices.  Other giggling girls strip and skinny-dip in the ocean, one of whom drowns in the water.

A real can’t miss--Have a look. 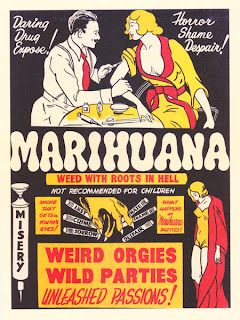 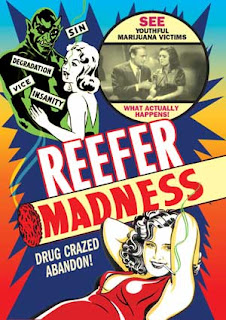