All the snow in my beloved Northeast Ohio has resulted in clogged roadways and, as a direct result, has made me completely uninterested in driving.  Or even leaving the house.

I’m far from agoraphobic, but it’s miserable out there.  So I’m home.  With my ROKU box and an Amazon Prime subscription.  Which can only mean one thing............Television notes from the Rust Belt--Youngstown, Ohio.

I watched the entire 2009 10 episode run of The Unusuals, a dandy police procedural with some twists--Like, for example, it was actually realistic.  At least as much as a TV show can be.   ABC killed this program after the initial 10 episodes for Godonlyknowswhy, proving that ABC is just as stupid as FOX in some respects.  This perfectly delightful program hits the trash heap side-by-side with Brimstone and a host of others.

It’s demise might be simply because of the name (“The Unusuals” sounds like a cartoon about a dysfunctional super-hero family), or maybe because ABC billed it as similar to M.A.S.H., which it’s not.  Had I tripped across this program in it’s first run, I may have passed just because M.A.S.H. was such a pain in the neck after Trapper John left.  M.A.S.H. was such a great book, and a decent movie, then got morphed into the Alan Alda crap-fest.......My mind wanders.  Back to The Unusuals.

We got Santa Monica native Amber Tamblyn as Detective Casey Shraeger, the wealthy and uncorruptible detective.  Amber has also been seen on Portlandia, The Increasingly Bad Decisions of Todd Margaret, and House as well as Tarantano’s Django.

Then we got Modesto, California native Jeremy Renner as Detective Jason Walsh, the former New York Yankee and partner of the aforementioned Detective Casey Shraeger.  Renner actually took criminology classes at Modesto Junior College before he managed to get REALLY into acting.  He’s been in lotsa stuff, and is good in all of it, but I know him from The Hurt Locker.

From “Space, Above and Beyond”, we got Santa Monica native Adam Goldberg as Detective Eric Delahoy.  This character is dying of a brain tumor but he won’t get treatment.  Sub-plots about in every episode about the brain tumor.  Good stuff, frankly.

There was a host of other characters, well portrayed by dandy actors.  Well written,  good camera work.  You just KNEW it was going to end early.  To make room for another incarnation of something with ghosts or New Jersey people no doubt.

This ended without wrapping up any of the dangling plot-lines, but was still worth the time spent--Have a look. 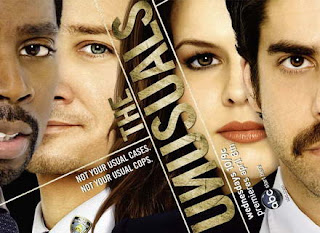