Seems that it’s still cold and windy in Northeast Ohio.  Night comes early in the winter here.  And we all know what that means.......

Non Stop New York is based on a 1936 novel titled Sky Steward by Ken Attiwill.  Didn’t take long to turn a book into a movie in the 30s, or so it would seem.

OK--Way too much plot to get in the way of the story here--Cute British girl witnesses a murder by a gangster in New York, then takes a boat home to Merry-Olde, then finds out that an innocent man is about to be executed for the murder, then becomes a stow-away on--THE STAR OF THE SHOW!!  It’s an airplane.  A really big one.  Something between a luxury liner and a passenger train.  Something straight out of Buck Rogers or Scientific American or Jules Verne, or............This aircraft takes off from the water, and it has sleeping quarters for the passengers and a dining area and a bar and an area to step outside and feel the rush of the air.  Hokey Smokes, Bullwinkle.

This movie, being released in 1937, coincides with the Hindenburg disaster and pre-dates actual transatlantic passenger flight by at least a couple of years.  So, sci-fi it is.  Or was.  Or something.

OK, then.  We got British Subject Anna Lee as the pretty girl.  Anna Lee’s filmography (per IMDB) starts in 1932 and runs straight through General Hospital and Port Charles.  She has a star on the Hollywood walk of fame and a smile that lights up a room.  She was in How Green is My Valley, The Sound of Music, and What Ever Happened to Baby Jane.  Whatta babe.

Then we got British Subject John Loder as the Inspector (and love interest of the aforementioned pretty girl).  John was born in 1898 and was captured by the Germans during WWI.  After being released from the POW camp he stayed in Germany and ran a pickle factory.  No, really.  He stayed there and ran a pickle factory.  Really.  He later became interested in acting after being cast in a couple of bit parts in Germany.......Yes, while running the pickle factory.  John had five wives (at different times) one of whom was Hedy Lamarr.  He and Hedy had two children.

Plenty of other quality cast members to go around here, and this is a fine way to spend 69 idle minutes--Have a look. 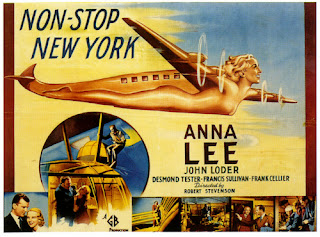