By the numbers, now.....I woke up before 6 this morning and there were 8 deer in the front yard, it was 3 degrees American, and 1 little dog was howling.  This is Television Notes from the Rust Belt--Youngstown, Ohio.

I've been watching The Glades on Netflix.  Now Netflix, Godblessum, only offers the first two seasons of The Glades, and all of those episodes have been consumed.  Why don’t I just turn on the A&E channel and watch it first run, you might ask.  Not that I haven’t been tempted, but I've become accustomed to watching television programming without commercials.  On Netflix.  And Amazon Prime.  And Pub-D-Hub.

Turns out I really don’t like modern commercials.  Not even a little bit.  Time was, they were cute and well made and had something to do with my life (Alka-Seltzer ads come to mind), but now, well.....Guess I just don’t have a burning need to hire a lawyer and sue someone for something, don’t care much about buying a new classless generic automobile, don’t want any new prescription drugs (or a Hoveround).  You get the picture.  I like having my television uninterrupted.  If I need a break, I put it on “pause”.

A one hour program only lasts about 42 modern minutes without commercials.

So, I’ll wait for one of my subscription services to offer the next season of The Glades, Haven, and a few others.  I have cable TV--and I enjoy some of it (like when I actually need a freak show on The Learning Channel)--but can’t stand the commercials.

The Glades is offered by A&E.  That’s Arts and Entertainment.  I guess this program falls into the “Entertainment” area.  Has to do with a displaced Chicago police detective who left town and landed in Florida employed as a....police detective.  His love interest is an undefined sort of ethnic nurse who’s married to a federally protected convict/informant and has a son, and his partner is a coroner--is that REALLY how they work it in Florida?  Really?  His boss is a black woman and the writers don’t seem to know very much about firearms.  They had an ejected shell casing at a crime scene from a .38 Special revolver, for example.

They get a lot of stuff about cops right, but then occasionally let their agenda slip through--There was an anti-gun episode where our main character harangues a legitimate gun shop owner for legally selling guns, and any time illegal aliens are written into the script, they are sympathetic and never the bad guys.  OK, it’s A&E.

As the main characters, we got Aussie Matt Passmore as Detective Jim Longworth.  He makes a dandy detective even if they sometimes have him wearing his large-frame automatic in a “behind-the-back” holster.  He used to be Warwick Mobbs on Underbelly (Australian), and was Marcus Turner on McLeod’s Daughters (also Australian), and was a regular on Aussie TV’s Play School, a children’s program.  According to Wikipedia, he has been in the army and done a variety of jobs, but he seems well-suited to be an actor.  I expect great things.

Then we got the horror of Kiele Sanchez portraying Callie Cargill as his love interest.  We last saw her being buried alive on Lost, and it seems that she should have remained there.  This character is a whiny painintheass for our love-struck Detective Jim Longworth.  My advise for Jim is this:  It’s never a good idea to hook up with the wife of a convict/protected witness.  Especially if she doesn't like cops to begin with.  WAKE UP JIM!!  You live in Florida with an endless supply of bikini-clad hotties.

To summarize, then--1)  A&E seems to have an anti-gun and pro-illegal alien agenda.  2)  The Glades is mostly well-written.  3)  Jim Longworth is a likable character.  4)  Callie Cargill is not.

The Glades is worth the time spent.  I actually like it despite it’s short-comings. 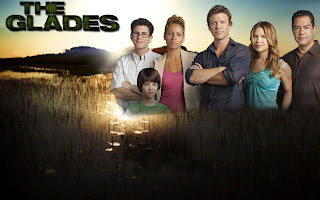