Not too much story to get in the way of the bad decisions, mood lighting, and scrappy dialog here.  Piano player begins to hitch-hike across the country from New York to El Lay to catch up to his love.  Along the way he’s picked up by a bookie who, by a bizarre twist of circumstances, is also heading to El Lay.  What WERE the chances?????  The piano player takes a turn at driving the convertible, and, during a rainstorm, stops to put up the top.  When he opens the door, the bookie falls out, hitting his head on a rock, expiring on the spot.  The piano player does the only reasonable thing.  He hides the body, assumes the bookie’s identity, and takes the car and the bookie’s cash.  Nothing else seemed reasonable at the time.  Having learned nothing about hitch-hikers yet, he picks up a hard woman of a  hitch-hiker himself.  Only thing is, when he introduces himself as the bookie, the hitch-hiker knows it’s a lie because she already knew the bookie.  Again, what WERE the chances?????  She black-mails the piano player into making yet more bad decisions.  You get the idea.  No good can come from hitch-hiking.  Even in 1945.

OK then.  As the main sucker (Al Roberts) in the photoplay, we got Tom Neal.  Tom got into movies in 1938, the very same year that he received his law degree from Harvard.  Coming from a millionaire-type lawyer family, he was destined to become a lawyer, but Tom had other ideas--acting in the movies, for example.  He was a hot-tempered amateur boxer who amassed a record of 44-3 with almost all of his victories coming by way of the knockout.  In 1951 both he and the aristocratic actor Franchot Tone were farting around with Hollywood party girl Barbara Payton.  Tom had a hissy-fit over the whole thing and beat the tar out of Franchot, causing Tom to be essentially black-balled from really good roles, despite his acting ability and rugged good looks.  So he became a gardener.  In 1965 he shot his then wife, Gale, in the back of the head with a caliber .45 pistol.  Charged with capital murder, he was convicted of involuntary manslaughter by a jury and spent 7 years in the California State Prison system, gaining parole in 1971.  Tom maintained that it was an accident.  Sure, Tom.  .45 to the back of the head is pretty much ALWAYS accidental. Tom managed to have a son named Tom Junior who starred in a remake of Detour in 1992.  While I haven’t seen the remake, I certainly intend on seeing it.  Tom Neal died at age 58, within months of being paroled from prison.  ‘Course, what else could you expect from a guy who wore lifts to enhance his 5 feet 4 inch stature.

As the Femme Fatale for this feature we got Columbia, SC native Ann Savage.  When Ann was born in 1921, her parents dubbed the newborn Bernice Maxine Lyon.  As a Femme Fatale, “Ann Savage” works better, no?  Pretty much everyone agreed that Ann Savage was a peach of a girl, and she was well liked--entirely opposite of her role in this movie.  She was in the movies from the 40s until just a year before her death on Christmas Day 2008.  Her father was career Army and Ann moved around a lot in her life.  She was one of the most popular WWII “pin-up” girls for our fighting men.  Ann was also a speed rated pilot, winning races behind the controls of her Comanche 250.  A life well lived in all respects.

Detour has been roundly credited with being a prime example of the “film noir” genre being the first “B” movie of it’s ilk named to the National Film Registry by the Library of Congress (in 1992).  To my horror, as I was conducting my minor league research on Detour, I found that this movie actually has it’s own Facebook page.  As Yoda might say, “Speechless, I Am”.

This one is a dandy--Have a look. 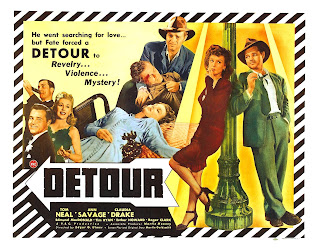