Yesterday I fired up the ROKU box and went straight to Netflix, where I found that one of the recommended movies for me, based, apparently, on my previous viewing habits, was that 1997 time-bending thriller, Retroactive. If it's recommended by Netflix, that's good enough for me, and it ought to be good enough for you, too.

About 90 seconds into the movie, I realized that I had actually seen this movie once before--maybe as a first-run, maybe I rented it (in those dark days before having Netflix and a ROKU box), or maybe I'm a character in a time-travel story. As my bride would be more than happy to explain, just because I once watched a movie (or read a book, or ate at a restaurant, or.....), that doesn't mean that I will remember anything much about it the second time around. And I don't, or didn't or something along those lines. I watched Deja Vu probably 12 or 15 times before I remembered that I'd seen it. That Denzel Washington is such a panic. But this is about Retroactive. I remember now.

Even though this was a second viewing, it was quite entertaining, and no, I didn't really remember much of the plot, thin as it is. Plenty of action and repetition to fill up the screen, though. Essentially, there's a Chicago police psychologist having a really bad day mentally due to her have been responsible for a dump-load of dead people because of her (possible) incompetence in a previous hostage thingie in Chicago. How she actually winds up driving through Texas we are never quite informed of, but there she is. She day-dreams her way into a car crash and her car is disabled, so she hitches a ride with a violent maniac and his wife in a Cadillac. Mayhem ensues and the heroine runs like the dickens into the desert finding an underground bunker that houses a......TIME MACHINE!!--complete with sort-of mad scientist  Talk about lucky. She goes back in time a few times, making thing worse every time. More dead people every time--Think of it a something in between Groundhog Day and Back to the Future but without all the good writing.

Loads of gunplay, car crashes and car chases, dead guys, police activity, pyrotechnics, and every other thing you might imagine is in a decent action movie. We even get an exploding gas station, and that's always fun. When I discovered that this was directed by Roger Corman protege Louis Morneau, I was not surprised. In keeping with his roots, Louis is also responsible, at least in part, for Carnosaur 2, Bats, Joyride 2, and Werewolf: The Beast Among Us. Whatta resume.

Starring as the heroine police psychologist from Chicago, we got Australian Kylie Travis. Kylie's had a number of small parts in this-and-that, and was cast as Julie Dante in that blockbuster Melrose Place spin-off, Models, Inc. Until she retired from acting to be the socialite wife of New York real estate magnate Louis Cappelli, she had quite a future in movies like Retroactive. What a waste.

As the Homicidal Maniac and general Southern white-boy sexist dip-stick, we got John's brother, James Belushi. James plays everything to the hilt, and I love this guy. Homicidal or not, he's one of my faves. He reportedly got involved in acting because the girls in his high school's drama club outnumbered the boys by about three to one. Same reason I took Spanish, Jim. Worked out well for you, but I still can't speak Spanish.

Plenty of other really good second-stringers cast in this thing, too--M. Emmett Walsh as the frequently killed gas station owner--It's a well known fact that any movie with M. Emmett is worth watching. Emmett is frequently cast as a Southerner, but was born in New York state. His college roommate was William Devane. We also got actor, director, writer, and habitual bit-part actor Frank Whaley as the sort-of mad scientist who runs the time machine. You'll recognize Frank immediately but not quite know from where.

The real coup of casting in this movie, though, goes to the truck driver being played by that alcoholic cocaine-dealing Hot Springs, Arkansas product half-brother to Bill Clinton, Roger Clinton.

Plenty of top-notch entertainment here, complete with a happy ending, more or less. Have a look. 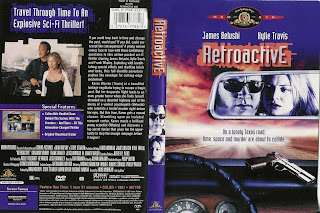