Had a couple of hours to kill before I headed off to work yesterday afternoon, and filled them with that classic 1954 film-noir, Highway Dragnet, all brought to my living room via Netflix and my beloved ROKU box, displayed for my viewing pleasure on the wide-screen, high-definition Vizio.  What a great combo, as they might say in a film-noir.

Plenty of good story here, but not so much that it gets in the way of the action and writing.  Korean war veteran hooks up briefly in Las Vegas with a washed up model in a bar.  They argue and early the next morning she’s found dead--strangled with a strap of some sort, it would seem.  Las Vegas Police accuse our innocent war veteran of the murder, he escapes from their custody.  I mean really now--he’s a recently separated Army Sergeant with a chestful of medals and plenty of ability.  How could he NOT escape.  The chase lasts from Las Vegas to the Salton Sea, and in the process, our hero hitches a ride with 2 other women--one of whom is the..........REAL KILLER!!  The other is is his love interest.  Betcha didn’t see that coming.

It was directed by WWII OSS operative and Romania native Nathan Juran.  Nathan had a grand career, winning an Oscar for art direction in 1941s How Green Was My Valley. After his WWII OSS service, he returned to the film world, directing, among others, Attack of the 50 Foot Woman and the 7th Voyage of Sinbad before turning to television and directing in such iconic television as My Friend Flicka and and Lost in Space.  A grand career by any standard.  Nathan died in California in 2002 at age 95.  I salute both your film career and your WWII OSS service, Nathan.  A life well lived.

We got New Jersey native and former truck driver Richard Conte as the hero.  You’ll immediately recognize Richard, and you may have seen him in supporting roles in The Godfather (he was considered for the role of Don Corleone) or in the 1960 version of Ocean’s 11 with Frank Sinatra.

The ubiquitous Joan Bennett plays the murderous woman.  Joan was everywhere in film of all sorts in her career.  She came from an acting family that went back to the 18th century, and had the role of Flora Collins in Dark Shadows.  She was nominated for an Emmy for her portrayal in Dark Shadows and has a star in the Hollywood Walk of Fame located at 6310 Hollywood Blvd.

Jacksonville, Florida native Dixie Wanda Hendrix plays the love interest/model in this story.  Dixie dropped the “Dixie” when she became a Hollywood type.  Most likely a good move.  She was married three times, once in 1949 to Audie Murphy....That marriage lasting only a few months due to Audie’s WWII flashbacks causing real difficulties in her life with Audie reportedly holding her a gunpoint on occasion.  She was subsequently married to the millionaire brother of Robert Stack, James Stack Jr., from 1954 until 1958.  Her final marriage was to oil man Steve LaMonte in 1969.  That marriage ended, like the others, in divorce, in 1980. Dixie Wanda Hendrix once appeared on the cover of Coronet magazine and was at one time considered a real up and coming starlet.  She died in the El Lay area of pneumonia in 1981 at the very early age of 52.  Very sad.

This movie features, in the opening scenes, a drive down the Las Vegas Strip of 1954, and, during the ending sequences the largest lake in California, the Salton Sea, and those alone are worth the price of admission, not to mention the classic vehicles featured, to wit:

All in all, dandy entertainment.  Have a look. 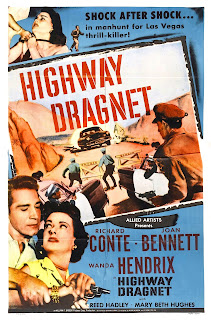