Dandy entertainment by any standard.  It’s set in the far future of the year 2000 and has to do with a coast-to-coast car race where the drivers gain extra points by running down pedestrians.

OK, then--we got, as stars, Kung-Fu hisself, David Carradine, and Sly Rocky Rambo before he was either Rocky or Rambo, but he was still pretty Sly.  They’re the main race drivers.  Now, in this future, every driver has a pretty female navigator, and, as the plot progresses, we find that the pretty navigators also have bosoms.  No full frontal nudity in this one, though, so we don’t really know if women still had pubic hair in 1975 (or 1974) or not.  Sorry.

Outside of the nudity and car race, one of the highlights of the show is a fight between Kung-Fu and Sly, but Kung-Fu easily wins.  Why, you ask?  Simple.  Carradine has ALREADY been Kung-Fu, but Sly has yet to become either Rambo or Rocky.

The race cars were pretty unique for the time--One of them is probably a Corvette, some are definitely VW’s with kit bodies, and there’s probably a Fiat and maybe a Mustang.  None of which look much like themselves.

It’s rumored that Corman originally wanted this movie to be, well, serious and dark, but rejected that idea out of hand early on and had it re-written as a comedy.  Good call, Rog.

A nearly perfect movie.  Have a look.  On Netflix. 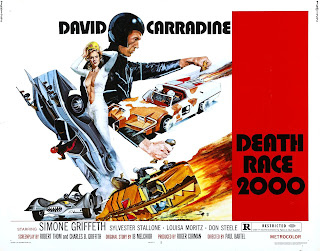