We're under a tornado and severe thunderstorm warning right now. So what if we're hiding in the basement? What of it anyhow? The rain is pounding and the wind is howling, but we still have internet, cable and power. This can only mean one thing--

Courtesy of Amazon Prime and my beloved ROKU box, the movie of the day is that future horror classic of 2008, Surveillance, an hour and a half of dead bodies and really sick situations. We have psychotic small town cops working for an incompetent boss, dead FBI guys (and plenty of others too), lots of profanity, and a pair of really bad folks. 'Course, everybody dies except the two really bad guys and a little girl who seems to have ice water in her veins.

In other words, hide the women and children. It's blood bath time.

We got, as the fake FBI guy, Bill Pullman, who, to me, will always be the President of the United States who personally flew a fighter jet against the space aliens in Independence Day. He's done plenty of other really good stuff, but he's what a President ought to be. I already wrote him in for President in one election, and, based on the current choices, may just do so again.
The other fake FBI guy is a knock-out woman played by British Subject Julia Ormond, who you may recall as Guinevere (opposite Richard Gere's Lancelot) in First Knight. At least that's what I know her from. Whatta babe.
The little girl is portrayed by New York native Ryan Simkins (yes, that's a girls name this time).  Her father is responsible because he's a baseball fan.  Named his little girl after Nolan Ryan, and, as a side note, named her brother Ty after Ty Cobb.  Bummer, Ryan.  Same to you, Ty. She won the best actress award in the NYC Horror Film Festival 2008 for her work in this role.
French Stewart of Third Rock is one of the psychotic cops—the first dead one—in this twisted police department.  French was funnier in Third Rock.  By quite a wide margin.
Michael Ironside, who lead the Mobile Infantry against the bugs in Starship Troopers plays the incompetent police chief—or captain—or whatever. In any event, he gets dead too. Just like in Starship Troopers.

Odd movie, but certain to be heralded as A-OK by fans and critics alike. 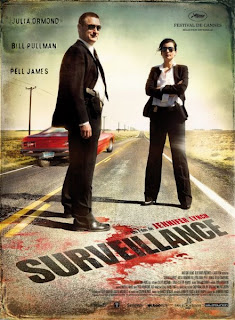 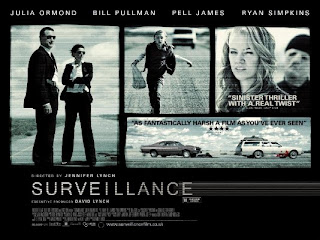