Spent a wee bit-o-time watching the entire 24 episode first season of Lost, that spectacular from the beginning of the century. I got onto it through my beloved ROKU streamer and my Netflix account.

Here's the main deal.....Every episode has on the average about 10 minutes of furthering the story, but that works out OK for me because, like I said, it's via my Netflix account. Commercial free. Each episode only takes about 40 minutes instead of the original 60. In any event, 24 episodes equals about 240 minutes of story.

We start with a plane crash—OK, actually the main body of the plane crashes on a deserted island. Wait, not exactly deserted, probably uncharted. In the Pacific. It's tropical, and it is clearly uncharted....maybe not, but at least not on any normal shipping lanes....OK, then. Looks mostly like Hawaii to me. I'll go with Hawaii. An uncharted Hawaiian island. The plane didn't go down in one piece—the fuselage with 40-some survivors landed on the UHI (that's what I'll call the Uncharted Hawaiian Island from this point forward)--no real reason that any of these people should have survived the crash that I can see—But they did. Probably for some reason. Least, I HOPE there's a reason.

Every episode in the first season consists mostly of heart-breaking back-stories about our main characters—and believe me, there's a crap-load of main characters—told via flash-backs mixed in with a little bit of story. There's also some sort of “entity” on the island that seems to be dangerous, and a couple of stray inhabitants. One is a French woman who's been stranded there for 16 years. Fortunately, in those years, she has apparently not run out of make-up or enough clothing to look proper. Interestingly, our survivor women also have yet to run out of make-up and fresh clothing. The men have a variety of facial hair from clean shaven (and shaved bald heads) through full beards, but most of them have that rugged “I haven't shaved in 8 to 12 days” look. I'm guessing that they have yet to run out of razors and blades and their beard trimmers are still running just fine, thank you very much.

I'm hoping that, since this sucker went on for 6 or 8 years, that the flash-backs wane a little in the second season, or I might not have the staying power enough to finish the series. If the writers were jugglers, they already have way too many balls in the air to be effective. They sorta need to start telling whatever story they have.

OK then—I didn't recognize any of the actors, main or marginal, but we got London native Naveen Andrews as the Arab—he's also been seen in the TV series Sinbad as Lord Akbari, and he looks pretty good in a beard.
We got Josh Holloway as Sawyer, the good looking confidence man with 8 days worth of beard. Holloway was once employed on a Georgia chicken farm as the guy who picks up and disposes of the dead chickens. In 2005 he was robbed at gunpoint of his cash, credit cards, and Mercedes Benz near his home in Hawaii. He's also a licenced realtor. Mr. Holloway is destined to go far.
Then there's Columbia University Frat-Boy Matthew Fox as Doctor Jack, the hero of the whole thing so far. Matt played a little football at Colubmbia and was voted one of the 50 most beautiful people in the world by People magazine in 1996. Before becoming Lost, he was a regular on Party of Five and Freshman Dorm. He managed to pick up a DUI in Beaver, Oregon in 2012, but I forgive him that (and being a Frat-Boy from Columbia too, for that matter) because he appeared in one episode of Wings, one of my all time favorite TV programs.
We also have Canadian Evangeline Lilly as the murdering fugitive Kate, who may or may not want to hook up with either Doctor Jack or Sawyer. Maybe not though. Evangeline ranked #12 in Wizard magazine’s Sexiest Women on TV in 2008, but she probably could have topped the list if she had only agreed to do the partially nude shots in Lost. Pity. A well-rounded young woman, she was previously a waitress, a flight attendant, and completed oil changes on big rigs.
There's lots of other main characters. If I get through the second season, I'll run down a few of them.

The jury's still out on Lost. Might be OK, might stink, might just piss me off at some point. I mean, for Pete's sake, they already have alluded to or shown numerology, fortune telling, unusually gifted children, kidnappings, bad vibes and bad luck, spacecraft, curses, incest, space aliens, government conspiracies, a pirate ship, and a drug smugglers wrecked airplane. At least, so far, we haven't seen any zombies or vampires. I'll keep you in the loop. 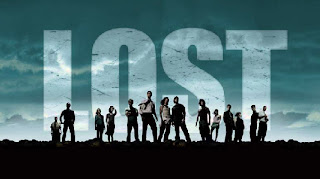