Well, Lost is getting dumber by the minute. I'll never be able to finish this idocy. Never. But I'm going to keep after it for awhile.

No, the flash-backs have not even abated a little bit, and the story just keeps expanding. Now it seems that the tail section of the downed airplane has survivors on another part of the island, there are aborigines or something (maybe they're the zombies) taking hostages and the Mexican gansta-girl survivor (from the tail section) has somehow become their Queen. There's some information about a communal living experiment dating back to the late 60s or early 70s. Seems that there's something very secretive called the Dharma Initiative too. Gadzooks. Magnetic earth-stuff, I think. There seems to be a Riverworld aspect to this thing too. Our writers and developers seemingly were well-versed in all aspects of both new and old sci-fi and pop culture.

Then there's the discovery of the underground bunker complete with supplies, a 70s era computer, a doomsday routine that has to be tended every 108 minutes, guns, and God only know what else. This does, however, account for the fact that they all now have working flashlights whereas in season 1 they relied on torches.

I mean, really now. Really. I read the Harrad Experiment when I was in the Army. Very groovy back then. Maybe the whole thing is a mind control experiment.

Peg Bundy has made an appearance via flashback as John Locke's squeeze, Helen. But she'll always be Peg Bundy to me.

There seems to be quite a bit of “running through the jungle” scenes here—there were plenty in the first season, too, but now there seems to be a little more of that. And then there's the non-English speaking Korean guy close-ups. All of this decreases the amount of time per episode actually spent on furthering the story, which I now assume was either pretty thin to begin with or is being made up as the writers go along.

The whole “feel” of this island paradise/prison/whatever is sort of Survivor-like. Look, this is a pretty large group of stranded people, right? Stressful. Dangerous conditions. And yet, almost every character is either head-strong to a bizarre degree or a loud-mouth. Seems like every single one of them wants to be the Chief of the tribe. Like it's a competition. My experience with dangerous, stressful situations (and there have been some) is that somebody makes a decision and then everybody else goes along with it. 'Course, my personal experiences didn't have that other-worldly, spooky, eerie quality that seems so prevalent on this island. Also, when the shit was hittin' the fan in my life, my mind didn't drift back (for 10 minutes or so) to when I was a boy and my sister hit me in the head with a baseball bat and how that shaped my entire existence. But that's just me, I guess.

As promised, a few more of the main characters:

We got Omaha, Nebraska native Jorge Garcia as Hurley, the fat guy who can't keep his mouth shut and whose life was ruined when he won the lottery. Bummer, Dude. Jorge is of Cuban/Chilean extraction and is well known amongst his pals for his massive, um, record collection.
Then there's Terry O'Quinn, who hails from Michigan, as John Locke, the former cripple who has seemingly been healed by being on this very spooky island. Locke knows lotsa stuff, including how to skin out a boar, which is not a bad item to have in your skill set if you’re going to be stranded on a sort-of deserted island. O'Quinn was Sheriff Joe Haller in Stephen King's Silver Bullet and appeared in a handful of episodes of the X-Files.
We have Australians here too, and that's necessary since the plane that crashed on the island originated in Australia. Some of their accents just make it hard to understand them for an old guy like me. So, we got Australian Emilie de Ravin as the sometimes hysterical, sometimes pregnant Claire. She's been acting for a few years and has prior parts in Beast Master and Roswell, which apparently led directly to Lost.

Jury still out. How this stinker won as many awards as it did, including the beloved Emmy, is beyond me. Same thing applies to lots of TV that won awards, though, so maybe I'm not the best judge of what is award-worthy. On the other hand, this might pick up a little and start being entertaining. After all, I was pretty excited about the set-up in the first two or three episodes.

As before, I'll keep you in the loop. 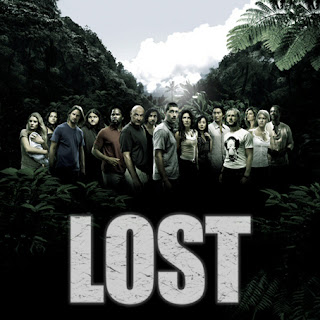