Lost seems to have devolved into an overly melodramatic soap opera. Pity. It had so much potential. I'll probably continue to watch this a little at a time, but, well.......

They killed off Boone (the step-brother and one-time lover of Shannon, that rich, spoiled, blond, painintheass who the Arab seems to head-over-heels into, but God himself only knows why) a few episodes ago, but the character lives on regularly in flash-backs. Can never tell for sure, but seems they may have killed off Shannon too—Shot in the chest by accident by the Mexican gansta-girl. She might survive the gunshot. After all, this is, in many ways, Fantasy Island. I keep expecting to see Tattoo peeking out from behind a rock.

I'm still not certain why the show garnered so many awards, but I have a thought or two on the subject. One: This show employed thousands of actors, writers, producers, camera operators, stunt men—you name it—for a few years. Not a small feat for a ditzy plot line like this. It might be worthy of awards because a vast number of Hollywood people got a regular paycheck.
But mostly, I think it's because of the camera work. This program, like Arrested Development, took the reality show/documentary style of camera urgency, utilizing hand-held cameras and bizarre camera angles. This style is attractive to a segment of the population, including Hollywood types, those who would like to think of themselves in that light, and, most likely, a younger audience, but not to me. I find this sort of camera-smithing to be at the very least distracting and pandering to a specific sort of audience, but it’s also distasteful and deceitful. This isn't a documentary, friends, it's a fargin' soap opera.

Then there's the on-going endless circular pointless self-involved flash-backs. At some point we'll probably be told that the real name of the island is Narcissistic Isle. Ick.

But, on with the show—We now have an entire flash-back episode of the first 48 days (I suppose that's how long we've been lost on Narcissistic Isle now) of the tail section people. On a different part of the island. With the zombies, or whatever they are. We get to re-live the horrific first days, complete with heroism (mostly by the Mexican gansta-girl), CPR, broken bones, fear, and EVERYONE wanting to be in charge. Yikes, he said with a smile. They tail section folks did bury their dead. How they managed to dig those perfect graves without a shovel....well. I guess the shovel is stored with the lipstick and fresh designer jeans, which always seem to be available.

At least we have found out that the zombies are actually the “others”. They are white guys dressed in burlap but no shoes, and they steal people. They have modern knives, too. Time will tell on this group, I guess. They have lists of the “good “ people too, and only steal the good ones. OHMYGOD!! Another mystery. And then there's this: It seems that Kate's murder victim's (her step-father, I think) spirit lives in Sawyer's body. At least when Sawyer is feverish. Christ.

One time in the past, I started to read a novel titled “Neanderthal” that I picked up in an airport. While on the plane, the story dissolved into not one lost Neanderthal tribe, but two—one good and one evil—with telepathic abilities. I threw it away. I fear that Lost may come to the same end with me.

We got native Texan Michelle Rodriguez (previously of Girlfight, appropriately) as the Mexican Gansta-girl tough-chick take-no-shit leader of the pack. Turns out that in addition to being a police officer, she's also a murderer...There's a plethora of killers is in this group. That might mean something. The character is Ana Lucia Cortez, an LAPD officer. Of course. Seems Michelle is self-described as having ADD, that current pop-illness upon which all sorts of nonsense can be blamed.

We had, at one point, Columbus, Ohio native Maggie Grace as the spoiled, rich, Shannon. She's now been killed off, like her step-brother Boone, with whom she had shared an incestuous exchange of bodily fluids. I suppose they deserved it. Boone had been portrayed by Ian Somerhalder, a product of Louisana. Beginning at age 10, Ian was a model for Calvin Klein, Guess, Gucci, D&G, and a host of others. So, I guess incest was a normal progression.

In any event, we should be spared any further involvement, except in the ever-expanding flash-backs, of Shannon or Boone.

As always, I'll keep you in the loop. 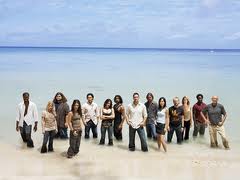