This all started because I was running through the woods with my dog, tripped over an exposed root, fell down and bruised both of my knees (now I have kneesles), and am hobbling around. When I have this sort of time on my hands, I watch movies on TV. I apologize in advance.

I like Bruce Campbell—What? You never heard of him? Neither had my Bride. So I did a short search on Netflix for Bruce Campbell movies and found, among others, From Dusk Till Dawn II. So I watched it. What a ride, he said with a grimace—FINALLY, a vampire movie that I can sink my teeth into. Made me laugh out loud in places. Great entertainment value here.

So I got back onto Netflix and found that there is an offering for the original From Dusk Till Dawn, and even a third entry into the Dusk Till Dawn franchise. When I saw that George Clooney stars in the original, it became clear that I would have to violate a personal principal. I would be forced to watch a Clooney movie. So I did. Not as good as the second, but still a decent ride. The single thing that saved the original was the addition of Cheech Marin playing three roles.

The third entry, set in 1900 era old West/Texas/Mexico was too terrible for words, even though Quentin Tarentino and Robert Rodriguez were still involved, Danny Trejo still had a part, and Orlando Jones is in this stinker. They also seem to have found Vampira's great-grandmother to play a pivotal role. Still, even she  does not save this movie.

Here's what makes these otherwise crap-fest level movies worth watching. Vampires. A Mexican strip bar named the Titty Twister. Nekkid titties. And, finally, Bruce Campbell and Robert Patrick in the second in the series. 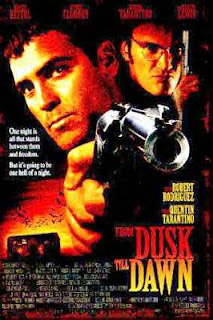 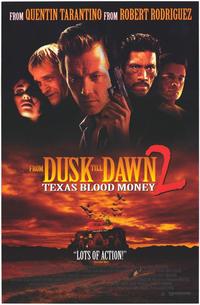 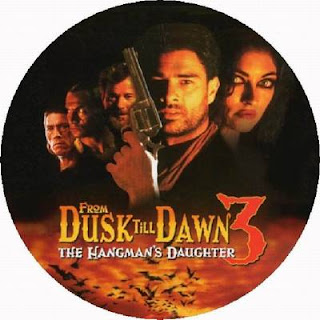