It's baseball playoff time, and I'm a Giants fan. The Giants are in the process of making a cameo appearance in the National League Division Series, and I'm dedicated to watching the disaster, but, well, today's a day off for them. So after work tonight, I fired up the Netflix account streamed more than adequately through my ROKU box and found that 1983 Christmas-time blockbuster, D.C. Cab.

More story than you usually get in one of these movies. Youngster from Georgia arrives in the national capital to fulfill his lifetime dream—becoming a Hack in the District of Columbia working for his dead dad's Vietnam buddy who owns the worst cab company in D.C.--D.C. Cab. Youngster makes the miscreants who work at the cab company get pride in their work by getting kidnapped. Kidnappers get foiled, youngster gets his girl, cab company gets resurrected, good guys win, credits roll.

We get all of the early 80s suspects here—a grand time to be alive, I tell you. There's a strip club scene with enough nekkid boobies to fulfill anyone's need, and one of them runs outside after one of the cabbies wearing, well, nothing, into the street. When she turns around we see that she has.....gasp.....pubic hair. Made me wonder what ever became of pubic hair anyhow. Seems that most folks had some back in the 80s. All the girls had big 80s hair too. Mebbe global warming is responsible. I'll have to ask Al Gore what he thinks.

We got Detroit native Max Gail as Harold, the owner of the cab company. This, apparently, was a step up on the food chain from being Detective Stan 'Wojo' Wojciehowicz on Barney Miller. I never knew a cop who didn't want to own a cab company. We also got Mr. “T” as Samson. Mr. “T” plays Mr. “T” and he does it well. Apparantly, after the fight with SlyRockyRambo in Rocky III, there was nothing left but driving a cab. We also got Bill Maher in his first movie--before he became a liberal weenie. He was still funny back then. We also got Gary Busey, Adam Baldwin (as the youngster), Paul Rodriguez, and a host of others. A fine group if ever there was one. An honorable mention goes out to Moriah Shannon as the aforementioned pubic hair endowed Venus Club stripper.

The final scenes include a high school marching band and Satan getting into one of the cabs. The marching band is magnificent, and Satan asks to be taken to hell, whereupon the cabbie asks if he has any luggage.

A fine way to spend an hour and a half. Have a look. 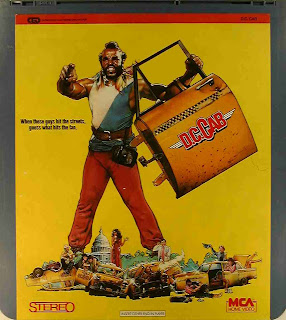