Look—If you made it here on your “Twin Peaks” Internet hunt, you probably did it on purpose. If, on the other hand, you were looking for a web-site on “Twinkies” or “Pekinese” then I figure you're just a crappy speller—feel free to leave now and continue your Internet frenzy.

Those of you who actually came here for Twin Peaks elucidation need to become more aware of your inner selves. I figure that if you came here on purpose and of your own volition, you already know the story, such as it is, and I need not re-tell it. Oh, like I could anyhow. There is this…..If you insist on watching this thing, try to have some mushrooms and chemicals on hand to ease the pain.

The creator of this stinker is David Lynch. He's originally from Missoula, Montana, and the winters are cold and long up there, leading some to suicide, and everyone else towards far too much introspection. FAR TOO MUCH!! And psycho-active drugs.

When you add in the psycho-babble, imitation Injun folklore, and other odd-ball nonsense, you get Twin Peaks. The real problem here is that Lynch adored the very idea of “the Timothy Leary of the 90's”, Terence McKenna, so much that he patterned the town psychologist after him. I'm pretty sure that I'm not the only one who noticed that, but I'm the only one who noticed it today.

That sort of casting is hard to miss. Dontcha know…..

Twin Peaks. I figure that without “Twin Peaks”, there could never have been “Lost”, and for that reason alone, David Lynch should eat his gun. It gets worse. Every episode is dumber and harder to follow that it's predecessor. The creators, writers, directors, and etcetras of this crap-fest should all be dragged out back and spanked. It's only saving grace is that every female in Twin Peaks (with the exception of the one-eyed girl) is a total babe. And, most of them hang out at the town's Whore House/Gambling Den/Metaphysical Outpost, One-Eyed Jacks. A teen-age boy's fantasy world if ever there was one, I tell you. Even the city limit sign has a breast-like countenance.

Ever wonder why Hollywood seems out of touch with the rest of America? Here's a clue: Twin Peaks won a bunch of Golden Globes and Emmys at the time, and as late as 2008, it won a Saturn Award for the Best Retro TV Series on DVD. Honest to Pete—These guys just can't quite quit suckin' each others' dicks over this thing. AND NOW…..Showtime is re-inventing Twin Peaks as…..Twin Peaks, starring most of the original cast. YIKES!!


In the re-make, if I bother, I'll be most interested to see if these three things are still there:
-Copious smoking of cigarettes and cigars
-Oriental stereotyping
-Lack-o-Black (people)

Those items fall pretty low on my list of “reasons to boycott”, but I wonder if Hollywood still thinks all that stuff is still avant-garde.

We Got:
One City Limit population sign that either says one number or some other number
A one-armed shoe salesman
A one-eyed woman
A whore house named One Eyed-Jacks
One sheriff named Harry Truman
One sawmill owned by Orientals
One mostly crazy FBI guy and his equally crazy forensics expert
One agoraphobic
One dancing dwarf
One intergalactic giant
One drug-addled shrinker named Jacoby…..
And one unsolved murder

We actually got one of a lot of things, but I'm pretty certain that there was never even one completely sober and sane writer at any time. Not one. At any time. And then there's this: They show us the bird at the beginning of every episode. I GET IT.

I watched this thing in it's entirety on Netflix. Then I thought I might want to see the movie “Fire Walk With Me” as a follow-up, but it's not included in any of my video streaming subscriptions. That means this: I'd have to pay to see it. None chance. None. Zero. I'd watch it for free, but Amazon wants $2.99 American. HAH!! He said.

As the blond corpse and her look-alike cousin, we get Augsburg, Germany product Sheryl Lee. She grew up in Boulder, Colorado, leading her to a lifetime attraction to outfits like PETA. She remains affiliated with the likes of David Lynch and John Carpenter for her livelihood. Pity.

As the hottest of hot, we get, from Detroit, Sherilyn Fenn. She's a babe by any standard, and graced the cover of Playboy once. She was a babe in Boxing Helena without any arms or legs. A babe is a babe is a babe. Here in Twin Peaks, and this is one of the show's highlights, she takes a cherry stem into her mouth and ties it into a knot using only her tongue as part of her interview to become a hooker at One Eyed Jacks.

As Sheriff Harry Truman, we get Michael Ontkean. Nothing starring Michael Ontkean can be all bad, but this comes close. For my money, he will always be a young policeman on The Rookies.

Playing the part of the mostly nuts FBI-Guy, we have, from yet another burgeoning metropolis (Yakima, Washington), Kyle MacLachlan. A great guy who also happens to be the mayor of Portland on Portlandia, and, as a career highlight, was none other than Cliff Vandercave in 1994's The Flintstones.

The Intergalactic Giant is portrayed by none other than that vegetarian Netherlands native, 7 foooooooot tall Carel Struycken. So, if you want to be really tall, be a vegetarian.

I could go on and on, but I won't (mostly because the battery in my wireless keyboard is giving out). The complete cast is endless, and everybody who is anybody was involved one way or another. That said, there's really only one reason to watch this show in it's entirety, and that is this: You need to have at least a passing knowledge of Twin Peaks to have any sort of a conversation with Californians who have advanced degrees.  That plus the appearance of David Duchovney in drag and full make-up.  Hubba-Hubba,

Pretty close to a complete waste of time. Thank God it was canceled after two seasons.  But the theme music is really sorta cool.

Catch it while you can…..On Netflix 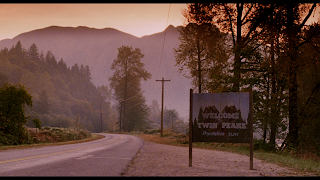