Eternal Rainfall? Did I really say that? It's been a warm summer week here. Without rainfall. In these parts, if it doesn't rain for two consecutive days, people start talking drought. Even though there's a wide fast-moving river just a few feet from the front door. Drought. HAH!!

It's Sunday, and you know what that means—That's right…..New stuff on Pub-D-Hub. One of today's new things was that 1943 barn-burner, “Jive Junction”.

I KNEW you were waiting for Jive Junction. I just knew it. Wait no more.

This fast moving jitterbugging musical will only take an hour out of your life. It's got no stars, and precious little story to get in the way of the plot—It's a musical about putting on a show. Look—this was war-time and people needed to get away from it all. And they didn't have the Internet yet. Or cell phones. Not even Velcro. And they all smoked cigarettes. If not for WWII, this movie might never have been made. There were lots of musicals about putting on a show in the 40's, mostly starring the likes of Bing Crosby and Fred Astaire and Ginger Rogers. But not in this one. In it's defense, this is the only time I've ever seen a movie that contained the word “Jive” in it's title, but have all white actors.

OK, then—We mostly got cast members who thought they might like to be in the movies, only to find out that they had no ability.

It starred Dickie Moore, whose real claim to fame is that he was the first actor to kiss Shirley Temple on film. He got a lease on public life in the early 50's on TV's “Captain Video and his Video Rangers”, and his final wife was Jane Powell. Good choice there, Dickie.

Gerra Young was introduced in this movie, and was never seen or heard from again.

The character of Frank was played by Kansas City product Johnny Duncan. Johnny grew up in the great depression and sang and danced his family out of poverty. He appeared in Thirty Seconds Over Tokyo, he was Robin in the 1949 version of Batman and Robin, and showed up in Bedtime for Bonzo. His last appearance in film was as the Beheaded Man in 1960's Spartacus, preceded by an appearance in 1959's Plan 9 From Outer Space. Fine resume all the way around, Johnny. You did well.

No nudity, no foul language, and genuinely patriotic. Also, not a complete waste of time. Catch it while you can on Pub-D-Hub streamed through your very own ROKU box. 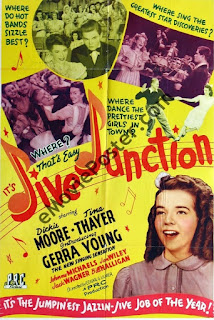