I don't normally much care for the movies from the 30's. No, I don't really know just why—Depressing from the Depression mebbe. Or maybe it was just the way things were filmed, written, directed…..

The exception that proves the rule is Night World from 1932. Everybody has a secret, and everybody holds a grudge. Nasty business, what with gangsters, cheating women, and other Night World stuff. We got cigarette smoking galore, and we all know that where there's cigarette smoking, there's gonna be some gunplay.  That's the real reason that cigarettes are so deadly, and everybody knows it, The men wore suits and combed their hair, and the women were dressed to kill.  Or be killed.

Way too much story here, especially considering that the movie only lasts 50-some minutes. Night World is just PACKED!! with intrigue. If Pulp Fiction has a genealogical predecessor, this is it. What a grand movie. The whole thing takes place in a New York speak-easy on one evening. Your Host (the Mr. Roarke of this story) is the owner of the establishment—Happy McDonald, played by none other than Frankenstein's Monster himself—Boris Karloff.

Everybody involved is top-drawer. No kidding. Here's a partial list:

-The aforementioned Boris Karloff—Frankenstein's Monster in the flesh. His wife is seeing another man, and he suspects as much. No wonder he's a monster.

-That WWII Conscientious Objector from Minneapolis, Lew Ayres. When newspapers called for a boycott of his pictures over his draft status, he became a combat medic and saw action in the South Pacific. Nice recovery there, Lew.

-Dorothy Revier, who made the jump from Silent Screen Vamp to the talkies. Nice going, Dorothy. Not everybody who was big in the silents could make it in talkies. A spit-curled hottie if ever there was one.

-Russell Hopton, who was in pretty much everything from 1926 until his untimely death at age 45 in 1945. Sleeping pills, or so I understand. For an actor who played a bunch of tough guys, that's a pretty cheesy way to do yourself in.

-The truly magnificent Hedda Hopper, who continued to appear on film until 1966, when she died of pneumonia. She was a right-winger for her time, castigating many in her gossip column. She was pals with Senator Joe McCarthy. She remains as one of my heroes. One of the people I'd invite to a cook-out if I could.

-From Hell's Kitchen in New York, George Raft. A real-life Mafia gangster, he was denied entry to England in 1966 due to his alleged Mafia connections. This guy was a childhood pal of Bugsy Seigel, and when he was a kid he was a bat-boy for the New York Highlanders (who later changed their team name to the Yankees). He actually turned down the role of Sam Spade in The Maltese Falcon, and backed up that bone-headed decision by turning down the role of Rick in Casablanca. Humphrey Bogart and I thank you, George.

The highlight of this film is probably the dance number choreographed by none other than Busby Berkeley. His story I'll save for another day.

A genuine don't-miss. Catch it while you can on Pub-D-Hub, streamed through your very own ROKU box into your very own high definition TV. 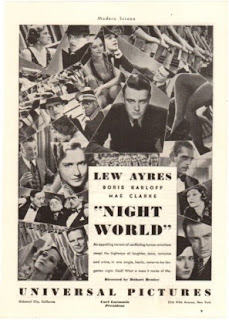