August 05, 2016
Nope, the Olympics haven't really held my attention much since the fall of the Soviet Empire. It used to be the Good Guys (Us) versus the Bad Guys (Them), and it felt like it meant something. Titanic struggles on the wrestling mat and on the track. And all that.

The current crop of Bad Guys don't really have a country and don't actually field much of an Ice Hockey team anyhow.

I figure that Croquet and Rubik's Cube can't really be very far behind.

In all fairness, they are also having some track and field events, and some shooting competitions too, but…….Really now, Olympic Golf? Canoe? Trampoline? Beach Volleyball?

I'm not going to watch. I'm worried that I might catch Zika over the TV.

Did you know that the colors of the Olympic rings originally represented different parts of the Earth? Refer to the graphic. 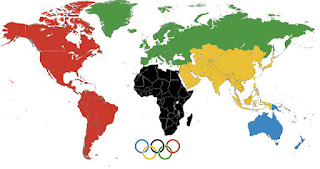