I had an hour to blow, so I fired up the ROKU device and went straight to Pub-D-Hub. Took a look into the Sci-Fi/Horror category and went into the “F” section. It's alphabetical, you see, and next to the Frankenstein stuff, I tripped across that 1946 thriller, The Flying Serpent.

Like all decent movies made in 1946 that last for less than an hour, this one was released under two names (in my business, we call this an alias—you can call it anything you want), so The Flying Serpent is also known as Killer With Wings.

Pretty straight forward here. Nutty scientist finds an ancient Aztec killer bird/lizard thing and captures it for his use—no, we don't know how he caught it. He just did. Oh, he also found a dump load of Aztec treasure, and every time someone gets close to the treasure, he unleashes the bird-thing—OK, they call it the Aztec God Quetzalcoatl—and it kills the offending treasure-hunter. Sucks their blood like a vampire, too, further complicating the hunt for the killer, dontcha know.

There's way too much plot getting in the way here—there's a Coroner's Inquest led by an investigative reporter who's in love with the mad scientist's step-daughter, and live radio broadcasts of the hunt for the killer, and ….gee-whiz.....it just goes on and on.

Anyhow, I'm pretty certain that Geraldo Rivera saw this picture just before he decided it would be a good idea to look for Al Capone's secret vault under the Lexington Hotel in Chicago on live TV. I'm also pretty certain that the Japanese movie establishment learned all they needed to know about flying creatures for their Godzilla movies by watching this piece of celluloid.

Stars, and I use the term loosely, include all the regulars of the time—Combat wounded WWI Veteran George Zucco as the mad scientist, Ralph Lewis as the early Geraldo, Hope Kramer as the love interest, and a host of others.

As if this stinker wasn't quite enough, in 1982, Larry Cohen re-made this thing and named it “Q”. “Q” starred Michael Moriarty, Candy Clark, David Carradine, and Richard Roundtree.

Having not seen “Q”, I can't really comment, but the fact that it was made is enough of a reason to see the original. Have a look. 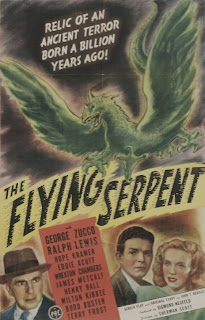