I know a guy who knows a guy. The guy my guy knows is from Canada. That guy found all 13 episodes of Brimstone being broadcast. In Canada. He taped them. Then he edited the commercials out of them. Then he made some DVDs out of the finished products. Then I got them. And watched them.

It's nice to know a guy who knows a guy.

This is more or less straight forward. NYPD detective's wife gets raped. They catch the rapist but he gets off on a technicality (go figure). NYPD detective tracks down the rapist and kills him (sometimes there's justice, sometimes there's just us). NYPD detective is subsequently shot to death in an unrelated incident, and because of his previous behavior, is sent directly to hell. Where he is to spend eternity. Except that 113 of the most vile souls in hell escape back to Earth. Satan, being a pretty smart cookie himself, enlists the aid of the NYPD detective to recapture the 113 escapees and send them back to hell.

Figure one soul per week, 113 weeks, and that makes 113 episodes, then straight to syndication and a lifetime of residuals for the principals. Except that FOX Entertainment canceled this winner after 13 episodes. Idiots.

We got Peter Horton as Zeke (Ezekial Stone, the detective). He apparently escaped hell at some point and became Max Ryan on the Geena Davis show, then subsequently returned to hell when he became Ted the Urologist in 2005s Happy Endings.

We got Maryland native John Glover as Lucifer. He's been everywhere and done everything, but this was a crowning role for him. Played the Devil with aplomb. The chemistry between Satan and detective Ezekial Stone was something to behold.

We got Dover, Delaware native and former Playboy model Teri Polo as the succubus sent literally straight from the depths of hell to muck things up a bit.

And then we got the slightly bizarre Tennessee product Lori Petty as Max, a frequent cast member in Brimstone. She was Tank Girl, and a whole lot of other people, but she will forever be Tank Girl to me.

Favorite quotes from this series:

The Devil: God's universe is not like the American legal system. You do something, you pay for it.

[In an Elevator]
Ezekiel Stone: Going up or down?
The Devil: Guess.

Ezekiel Stone: You really push a man to the brink.
The Devil: I am the brink.

[Going through Stone's mail]
The Devil: Junk mail, mostly. One of my lesser triumphs.

There were many more—You'll just have to watch for yourself. I'm pretty sure the writers had a ball with this stuff. I know that I would have.

When this series was canceled without ceremony, there were 6 more episodes in various stages of completion. If you're interested, they're listed at http://www.johnglover.info/brimstone/unfilmed.html.

If you happen to catch these on Chiller or SyFy, it's time well spent. 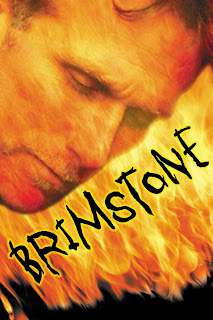 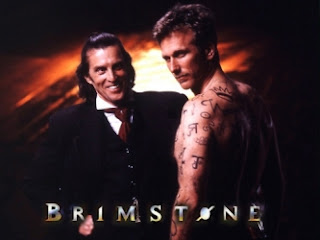