Courtesy of my ROKU box and Netflix, I recently watched Quest For Fire, that 1981 blockbuster of prehistoric times. It's a French movie based on a 1911 novel of the same name by, well, a French guy. Very Continental all the way 'round, wot?

Not an excessive amount of plot to get in the way here. We got the Ron Perlman tribe of Neanderthals living a life of leisure in their cave when they get attacked by the Monkey-Man tribe, who are hairier. I mean HAIRIER, buster. The Monkey-Men swipe both the fire and the women from the Ron Perlman tribe, forcing a.....wait for it.....Quest For Fire.

Ron Perlman and two of his pals take off in search of fire, and, as we will see, innovative women, leaving the rest of the tribe to twist in the wind.

Ultimately, our trio of heroes finds the mud people, one of whom is Rae Dawn Chong. The mud people don't wear much clothing, are smarter than the Neanderthals, and Rae Dawn hooks up with our trio, teaching them a number of things, listed here in order of importance:

We got the son of a retired New York City Clerk, Ron Perlman, as the main Neanderthal. Failing to evolve, he later became Hellboy and then Clay on Sons of Anarchy.
We got Miami native and Indian pottery collector Everett McGill as the Neanderthal recipient of Rae Dawn's sexual proclivity. Everett also failed to evolve, having been cast as the priest/werewolf in Steven King's Silver Bullet.
Finally we got Canadian born daughter of Tommy Chong, Rae Dawn Chong as the scantily clad sex maven from the mud people. Rae Dawn also failed to evolve, later starring opposite Arnold Schwarzenegger in Commando.

Not a complete waste of time, but not the friggin' documentary that some movie reviewers would have you believe either. Have a look. 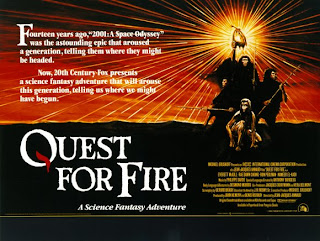