Just finished watching The Angry Red Planet, a 1959 Sci-Fi epic, courtesy of Netflix .  50s Sci-Fi is one of my favorite pastimes, and this one lands near the top of the heap.

There’s not a heckuva lot of plot to get in the way of the story here.  Mission to Mars.  Monsters on Mars who kill one of the crew.  In an interesting twist on the monster types, we have a giant one-celled creature that absorbs one of the crew in ghastly detail--nothing like you’d see now, of course, but still.....I mean, for Pete’s sake, he was ABSORBED!!  The male lead and the female lead manage to get home in their spacecraft to tell their story, which consists of a warning to keep away from Mars because, well, humans are so war-like and all.

You got your square-jawed all-American hero leading the crew--A Humphrey Bogart look-alike named Gerald Mohr, who worked in the movies and TV steadily from the late 30s through is early death due to a heart attack at age 54 in 1968.  You got your hot red-headed (ala Lucille Ball) lady scientist (played by Naura Hayden) who is the love interest of the spaceship Commander, or so it would seem.  Ms. Hayden appeared on TV regularly in the 50s and 60s, although never in a starring role.  The role of the absorbed crew member was played by none other than Jack Kruschen, that Canadian dynamo who typically was cast in the movies and TV as the mildly ethnic comedy relief.

All of the Mars surface shots were bathed in red--what with this being the red planet--and it did lend a certain alien atmosphere to that part of the movie.

Not a bad way to spend and hour and a half.  I liked it. 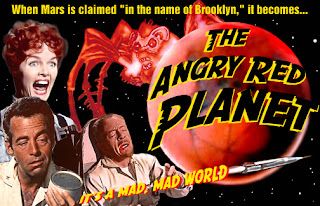 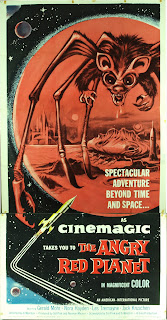