July 26, 2013
Found myself with a bit of time on my hands this afternoon and went to Pub-D-Hub on my ROKU box to find a mindless public domain movie to watch.

Teenagers Battle The Thing is a 1958 60 minute wonder of vapid entertainment.  No story whatsoever to get in the way of the droning.  Here’s the run-down:  College professor and his students discover a mummified, um, mummy, I guess--cave-man if you prefer--in a cave.  Having never seen a horror movie in their lives, they remove the mummy from the cave and bring it to their cabin in the orange grove.  It manages to re-animate itself and kills a babysitter.  Our heroes call the sheriff, who arrives driving a 1959 Chevrolet Biscayne station wagon.  The entire group manage to kill of the mummy by dousing him (or maybe her, we really don’t know) with gasoline and setting him/her ablaze with a lit flare.

And that’s all there is.  The single most amazing thing about the movie is that, while it was filmed in 1958, the sheriff arrived in a car not built until 1959, and nobody seems to notice that there’s a time-travel angle to explore there.

The story was written and directed by two men who share the same last name (Flocker), so I’ll go ahead and assume that they’re related somehow--not like they were a couple of Smiths, you know.

The cast consists of seven people (including the dead babysitter and the sheriff), none of whom were involved in any other film making.  The pressure must have just been too much.  Same applies to the writer and the director.  Never to be seen or heard from again.

This movie was released twice, if you can believe it--in 1958 it was a black and white one hour flick named, as I have previously mentioned, Teenagers Battle The Thing.  For some ungodly reason, it was re-made and re-released as a color movie in 1976.  The 1976 version is called Curse of Bigfoot, and starts with a couple of the original actors introducing their story, then the ENTIRE original movie is shown as a flashback.  Is this a great country or what?

The whole thing was filmed in a citrus grove in Agua Dulce, California.  For the un-initiated, Aqua Dulce is a small town in Los Angeles county located between Santa Clarita and Palmdale.  Lots and lots of movies and TV shows are filmed there.  Feel free to look it up on IMDB.com.

You can find this thing everywhere--google either title and you’re on your way.  Or, you can buy a VHS of this on Amazon.

Worth the time spent if only to see what actual teenagers looked like and how they dressed in 1958 El Lay.  You can bet they had to wear their own clothes in this stinker. 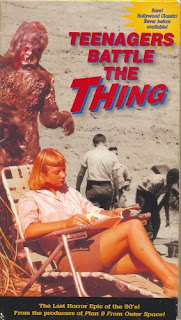