July 21, 2013
Had a little time to burn this afternoon before I went to work, so I fired up the 46 inch wide screed, high definition Vizio and took a peek into the Pub-D-Hub offerings on my beloved ROKU box.  All fed through my wireless home network.  Is this a grand age we live in or WHAT?!?!  And, we know what this means--

And here’s what I found today......  Night Tide from 1961--an hour and a half of Beatnik life from Southern California--Venice Beach and Malibu mostly, but you’ll get the idea of what the El Lay beaches were like before the Beach Boys landed.  Dennis Hopper is the name brand actor here, playing a sailor, apparently AWOL (we know this towards the end of the movie because the Shore Patrol takes him away in a 1953 or 1954 Ford station wagon--OOPS, that would be a spoiler, I guess), who falls in love with a mermaid.  Well, maybe she’s a mermaid, maybe she’s not, but I won’t spoil that part of it.

But I digress--back to the Beatniks--we got Bongo drums, clairvoyants, a four piece combo with a lead flute player, trance dancing on the beach, plenty of cigarette smoking, and a Sea Witch.  We got two guys in love with the same mermaid, and we know that no good can come from that set-up--never does.

There’s not really much action or even much story to get in the way of the Beatnik beach life--An old story really.....sailor meets mermaid, mermaid drowns, sailor gets tossed in the brig by the Shore Patrol for being AWOL.

OK, then--we got Dennis Hopper playing Johnny, the sailor and mermaid lover--we all know Dennis Hopper--this was before he turned into a complete dip-stick in the 70s and before he recovered from alcohol and substance abuse to resurrect his sagging career--Dennis died a couple of years back of prostrate cancer.

Next we got Linda Lawson as Mora, the mermaid.  Now, as with so many Hollywood types, Linda Lawson was not the name her parents gave her--she was born Linda Gloria Spaziani in 1936.  Linda (by whatever last name) had been a Las Vegas showgirl, and in this movie she really is a knockout.  Long dark hair and legs that reached all the was to her, um, skirt.  Linda was one of those girls who made it in Hollywood before girls, generally, needed silicone boob jobs.  Linda was in everything in the 50s and 60s, including Sea Hunt and the Aquanauts--she does some scuba in this movie too.  She now lives in Beverly Hills, and was last seen on ER in 2005.

There are numerous small parts in this movie, all worthwhile, but the Sea Witch bears some comment, and here it is--The Sea Witch was played by Cameron--or, if you prefer, Marjorie Cameron, or if you prefer, Marjorie Cameron Parsons Kimmel, or any combination of this that you might like.  Until his death by a mysterious explosion, she was married to Jet Propulsion Laboratory scientist (and co-founder, I guess), Jack Parsons--Cameron was a devotee/follower of Ordo Ternpli Orientis, and mysticism in general--dabbled in art, and was generally your typical Hollywood type--She was in the Navy during World War II and served with the Joint Chiefs of Staff.  Whilst hooked up with Jack Parsons, she was also involved with L.Ron Hubbard and his eco-system.  And that’s enough of her.  Red headed with blue eyes, a striking woman by any standards.  Or so I have read.
Night Tide is worth the time spent, if only to see the beach towns of El Lay circa 1961. 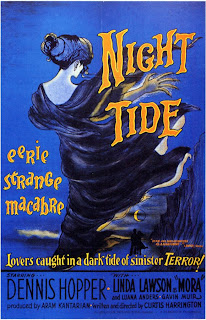