The Seventies.  Nineteen-seventies, that is.  Before the Internet, cell phones, and, to the greatest degree, Velcro

When you ran low on fuel, you pulled into a “service” station.  No, not a “gas” station where you pumped your own, but a “service” station where a young man in a bow tie came to your car and greeted you, then sold you premium gasoline at 35 cents a gallon.  While the gas tank was filling, he washed your front and rear windows, checked your tire pressure, motor oil level, coolant (it was called it “water” back then), and your power steering fluid (maybe your brake fluid too, if you asked), and he did all of this at no charge.  When you paid for your gasoline, he presented you with a receipt, a hand-full of Blue Chip stamps (redeemable for merchandise) and a free steak knife.  If this Service Station Attendant worked 40 hours a week at a buck and a quarter an hour, he could afford rent, groceries, a late model used car, a girlfriend, and the occasional trip to the drive-in.  Young men had mutton chops and young women wore Gunne Sax.  America used to be like this.  And it was good.
Some people think that the Seventies were classless and generally awful, but I’m not one of them.  Besides everything else, that was the only time in my life when the gay guys didn't get the first crack at the good clothes.  A grand time to be alive, I tell you.

Which, of course, brings us to:  Movie Notes from the Rust Belt--Youngstown, Ohio.

Today’s twin bill from my beloved Seventies begins with that 1972 classic, Daughters of Satan, starring Tom Selleck (you know, Magnum..Jesse Stone..Etc.) as a curator of old stuff, living with his wife in the Phillipines.  The wife is played by the daughter of Miss America 1945, Bess Meyerson, none other than Barra Grant.  She was born Barbara Carol Wayne, and how she became Barra Grant is anybody’s guess.  Barra acted in a smattering of television and movies in the seventies, then became an occasional writer.  Not too much story to get in the way of the creepiness here--Tom buys a 400 year old painting of a trio of witches being burned at the stake because the witch in the center of the painting looks JUST LIKE HIS WIFE!!  What were the chances?  Anyhow, turns out that his wife is the reincarnated witch from the painting, he’s the reincarnated executioner, and she kills him with an antique knife at the end of the story.  Very Seventies, very creepy, very cool.

The second half of the double feature is that 1976 offering, Burnt Offerings, starring none other than cross-eyed Karen Black as the wife of Oliver Reed.  Karen actually began a college career at Northwestern when she was 15, but dropped out before she reached the ago of majority.  Oliver, bless his heart, died at age 61 (in 1999) in a Malta bar after downing three bottles of Captain Morgan's Jamaica rum, eight bottles of German beer, numerous doubles of Famous Grouse whiskey and Hennessy cognac, and beating five much younger Royal Navy sailors at arm-wrestling.  Way to go, Oliver.  Not much story here either--Karen and Oliver (and their 12 year old) lease a creepy old house from Burgess Meredith for the summer only to find out that the house has a mind of its own, causing Karen, ultimately, to kill Oliver and the boy.  Damn if this isn't always the way.  Damn.  As previously stated, what WERE the chances?

An absolutely lovely way to kill a couple of hours.  Have a look.  On Netflix. 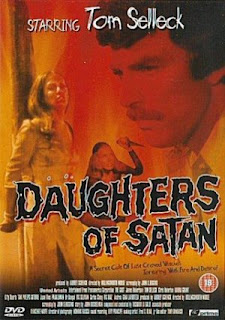 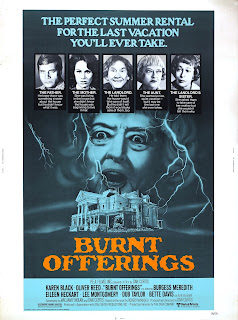