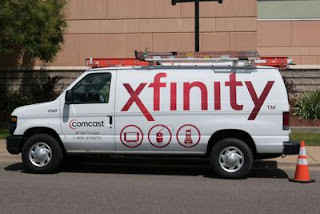 Here’s the way it started—I have an Internet-Centric house. I stream EVERYTHING. Comcast/Xfinity is my source for a signal because the actual signal that comes through the coax cable is massive when compared to the only alternative here which happens to be Centurylink DSL, and not the fiber-optic stuff.

I think you might be able to see where this is going.

I have the minimum cable TV package that’s available, and I access it via the ROKU streaming application. When I got that app, I was specifically informed by a Comcast employee on the phone that streaming through that app did not count against my data cap. They were specific. Mostly, when I watch TV, I access it through HULU anyhow, not Comcast.

Had a Comcast Tech at the house today who told me exactly the opposite regarding the Comcast streaming app—he said that anything that was streaming through the modem/gateway (their hardware, BTW) counts against the data cap. Who to believe? Your guess is as good as mine.

Also, I have an absolute crap-load of devices that access the WIFI signal in my house—Computers, Tablets, Phones, ROKU boxes, Amazon Fire-Sticks, Televisions, a Net-Talk Duo home phone...It’s endless. I use a lot of data. A lot.

I’ve had this set-up for a number of years—The number is 4. Four years. I noticed last October (2018) that my data usage was getting perilously close to that TB cap. Scared me a little because I try to pay as little as possible to Comcast. Turned out, that was an anomaly. I wrote it off to Windows upgrades on the computers. No further problems were observed, and I kept pretty close tabs on my data usage via the Comcast on-line tools. Three or four months ago, I exceeded the data cap. Then, I exceeded it again the following month. Exactly why I’m now using more data is not completely clear, but I’ll stick with Windows upgrades and HD video streaming. Regardless, I exceeded my cap two months in a row.

Comcast allows you to exceed your arbitrary 1 TB data cap twice for free, then they begin to charge. In 50 GB increments. None of this is news to heavy usage Comcast customers. They promise to not charge you more than an additional 200 dollars American per month, regardless of just how much you use. God bless ‘em anyhow.

I told you all that so that I could tell you all this:

Like I said, I am a paying subscriber to Comcast and have been for the past 4 years. One of their selling points, at least for me, was their “xfinitywifi” hot spots planted in each and every modem/gateway that they put into play. That made it possible for me to watch a baseball game or a movie on my Kindle or phone when I was away from home simply by allowing the wifi antenna on my device to find a nearby Comcast customer with a working modem/gateway. Piece of cake, and a pretty nice touch. All I had to do was log into the service by using my Comcast-assigned e-mail address and password. The modem/gateway that belongs to Comcast, but resides in my house, also broadcasts such a signal for anyone in the vicinity to use. Costs me nothing. A freebie provided by your friends at Comcast. A corporation with a heart, right?

Comcast heavily advertises this ability to access wifi away from home at their “hot-spots” on their web-site, and even has a page devoted to how you can let your guests at your house glom onto it without using up your bandwidth. What a fargin’ deal, right?

The other main selling point for Comcast, of course, was that I had no other real choice.

The TV’s that I have in my house (and there are quite a few) each are equipped with a ROKU box and an Amazon Fire-Stick. They each have their unique benefits and short-comings, but by having both on each TV, I had a workable solution to watching TV as a partial cord-cutter.

When I realized that I was habitually bumping up against, or exceeding, that bastard the 1TB cap, I needed to come up with a solution. Comcast will sell me unlimited data for an extra 50 bucks American a month. Look, 50 bucks isn’t going to break me, but……….

In order to address Comcast’s arbitrary 1TB cap that I was bumping up against and sometimes exceeding, here’s what I came up with---I figured that I would access the “xfinitywifi” hot-spot signal with the ROKUs or Fire-Sticks rather than accessing those devices with my secured home wifi network. The Comcast modem/gateway broadcasts two separate signals. One is my personal network with a password, the other is the unsecured “xfinitywifi” signal. I immediately discovered that the ROKU boxes could not be configured to access the “xfinitywifi” signal despite it appearing in the list of available networks. Turns out, this is because the ROKU device’s operating system doesn’t have native browser support. But the Fire-Stick sure as hell does. It’s operating system is a sort of Android thing and is DOES have native browser support.

This means that I have a solution. I went into the Fire-Stick’s settings one by one and selected the “xfinitywifi” network signal using my Comcast-assigned e-mail address and password. At home, we began watching all of our streaming TV through the Fire-Sticks and, brother, it worked like a charm. My data usage went from the neighborhood of 900GB per month to the neighborhood of 300 GB per month—Well within that 1TB cap. Problem solved at no cost.

That was 3 months ago.

5 days ago, I woke up and turned on the TV and discovered that the “xfinitywifi” signal had disappeared. Gone. I went into the Comcast web-site, restarted my modem/gateway a couple of times, gave it a hard re-start by unplugging it, and toggled the “xfinitywifi” public access, turning it off, then back on a couple of times. Checked all of the connections and cables. “Xfinitywifi” was still gone. Figuring that the modem/gateway had suffered some sort of problem, I telephoned Comcast.

And that’s always a thrill.

Over the course of 2 and a half days, I spent something over 2 hours on the phone with a wide variety of call-center types on another continent who seemed to be completely baffled by this turn of events. They accessed my account, and my interface, and my modem/gateway repeating all the things I had already done. I maintained that, since it does not seem to be a software or cable issue, it must be a hardware issue, and insisted that a Comcast tech come to my house and diagnose the problem. They relented and made an appointment for the following day (that would be today).

Fact is, every Comcast employee I have ever dealt with has been friendly, talkative, in good humor, apologetic, and completely incapable of performing any function beyond selling you an upgrade for just a few bucks more than you're now paying.

8 AM today, up pulls the Xfinity truck in the drive, and in comes yet another friendly apologetic guy with some diagnostic equipment. Bottom line for him, after an hour or so, is that there’s nothing wrong with the hardware. After consulting with some other technicians via text, he suggests that there must be a limit on how much an individual “xfinitywifi” hot-spot can be used, then someone at a MUCH higher level disconnects that hot-spot. Only a guess, mind you. Essentially, according to the tech, this is a mystery that has never before been heard of, reported, or addressed.

Of course, he says that’s only a guess. It’s nothing he’s ever dealt with before in his 10 years with the company.

I can tell you this with certainty--If there was a viable alternative, I'd drop Comcast/Xfinity like a bad habit.  If CenturyLink ever shows up here with fiber-optic, or when 5G modems come into play.......