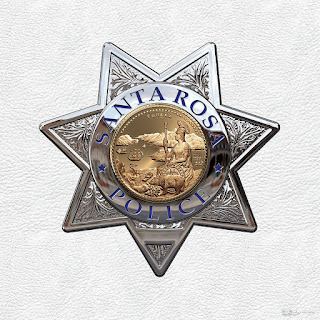 Time was, I worked as a police officer for the city of Santa Rosa, California. I’ve been retired for a long time now and no longer live in or anywhere near Santa Rosa (or California, for that matter), but I still pay attention to what the good guys are doing down there.

For an extended time I was a swing shift patrolman, and I liked the work, the action, and the equipment. I always thought I was pretty good at it too--It was more than a job to me.

I saw a video of a domestic violence/kidnapping in Santa Rosa where the police department deployed, among other fancy gadgets (I’m sure), a drone. A fargin’ drone. With that piece of equipment, they located the bad guy hiding in a tree and took him into custody. That’s what I call a good job by all concerned.

A goddamn drone. My God.

In 1977 (or maybe 1978) I was working as a patrolman in Santa Rosa on a weekend night—5th street at that time was a one-way affair (and, for all I know, it still might be) and could be a little bit confusing. I stopped a car that was going the wrong way on a one-way, if you get my meaning, and I think you just might. Turned out the driver was an older guy, not impaired, just confused.  Retired LAPD. He was flabbergasted at the electronics, the light bar, the multi-channel radio, the fact that I had both a radio in the car and one on my belt. We had a great conversation, I got him turned around, and let him fart around in my assigned 1975 Ford Custom 500 patrol car (the finest patrol car ever designed, but that's a story for another day).

A great guy. Who’s time was over. His police work had ended sometime in the early 50’s. I’m sure he missed the brotherhood—after all, he had left the city of Angels and the people who knew him when he was young, vital, bulletproof, and immortal in his rear-view mirror, then landed in Santa Rosa. Chances are, he had already out-lived many of his contemporaries.

I know just exactly how he felt.

No, I didn’t write him a ticket.