July 24, 2016
It's summer time here in Castle Rock. SCORCHING!! 80 degrees, cool breeze off the river, mottled sunshine. Like I said, SCORCHING!! I live on a bit of a hill, and the grass in the yard is, as a direct result, hilly. My mower is the sort that has to be pushed or pulled. I cut the grass. Pushing and pulling. I tired myself out, what with all the pushing and pulling in the scorching heat. So I poked around the offerings from Amazon Prime, and found, much to my delight, that 1996 Thriller, Unforgettable. While watching the movie on television, I recuperated from my foray into the scorching heat of Castle Rock. You already know what this means, and I apologize in advance…..

Television Notes from the land of Perpetual Rainfall—Castle Rock, Washington

This is one dandy period piece of a thriller noir sorta thing. Way too much story that really gets in the way of the plot here. In brief, we got a good guy medical examiner who was tried and acquitted regarding the murder of his wife. He hooks up with a really pretty scientist who has developed a method for recalling the final thoughts of dead things. Knowing how sophisticated you undoubtedly are, I bet you know what happens next. We got crooked coppers and uncrooked coppers, and plenty of blood and gore, but no nudity. Pity, since the women acting in this feature are all babes. As could be predicted, the good guys win out.

On to the particulars: As the good guy, we got none other than that Newark, New Jersey product, Ray Liotta. Always a good choice for a tough guy, even though he's an adopted feller with a heart of gold.

As the scientist babe who developed the stuff to allow the total recall of dead people, we got Linda Fiorentino. When she was born, her parents named her “Clorinda”. I can just bet that was a problem in her teen-age years. Good job on the name change, Clorinda. She's been in all sorts of stuff, including a role in a Charlie Sheen stinker called “Beyond The Law” (which certainly had to be a low point in her acting career or the result of losing a bet) but for me, she will always be Laurel Weaver in “Men In Black”. Whatta Babe.

As the most crooked of all possible cops, we got Manahatten-born Rachmil Pinchus Ben Mosha Cohon. Don't know that name? You can call him Peter Coyote. All his friends do. He picked that name because he's a new-age nimrod. Ate some Peyote in the 60's, had hisself a vision-quest and saw a coyote, then consulted with a genuine Injun Shaman and became Peter Coyote. Like everyone else in this movie, he's been around plenty, but his best role ever was as Slick Henderson in Baja Oklahoma.

You'll recognize almost everyone in this story. Christopher McDonald (Shooter McGavin in Happy Gilmore) is a snarky, but not evil, Detective, Long Island, NY native David Paymer (of City Slickers and Payback, among others), Kim Cattrall—another babe—of Sex and the City. Look, everybody involved here is top drawer—It was directed by John Dahl, who later directed a handful of episodes of Justified, and has subsequently hooked up with Ray Liotta again directing Ray Donovan.

A real don't miss—available now for streaming with a subscription to Amazon Prime—Catch it while you can. You won't be disappointed. 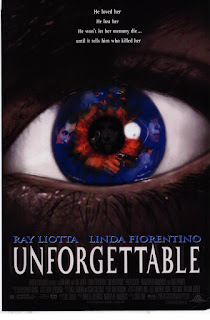