June 14, 2016
Yeah, yeah, yeah……….And not in the Beatles manner. I know that it's June and all, but it's windy and cold and rainy here. The grand and green Pacific northwest. Everybody loves it here what with Portland and Seattle and Starbucks and Costco and grunge and all the rest of the crap up here. My take is this: It rains a lot.

Movie notes from the land of perpetual rainfall—Castle Rock, Washington.

I'm not working for a few days, and, like I already said, apparently it's still winter. Winter isn't severe like it was in Ohio, but it's glum and there's a bite in the air. Looking at the offerings on Amazon Prime, I settled in on a Denis Leary movie entitled Double Whammy, an hour and a half feature from 2001 that was one of those “direct to DVD” offerings. I wasn't expecting much. It was better than expected. By a wide margin.

The story is disjointed and jerky revolving around a troubled New York City Police Detective (Leary) while he tries to get past the death of his wife and daughter in some past time frame. Look, if you like Denis Leary stuff, you're going to like this, and if you can manage to stick with it for the entire 92 minutes, it's worth the ride. Swear to God.

I like Denis Leary stuff. It was worth the ride. Swear to God.

And then there's this…..A brief nipple showing on the part of Elizabeth Hurley. Now, I can't be absolutely certain that it's a genuine Hurley nipple or that of a nipple-double or a stunt-nip, but I'm the one who saw the movie and I say it's a genuine Hurley. And that alone is worth the price of admission. Whatta Babe.

You'll recognize just about everyone else in the cast from somewhere, and there's really no reason whatsoever that this couldn't have been a regular release into the theaters. I mean, really now, if Teenage Mutant Ninja Turtles can have theatrical releases into infinity……………

Catch it while you can on Amazon Prime, the best hundred bucks per year you can spend. Not even considering the free shipping when you buy your junk from them. 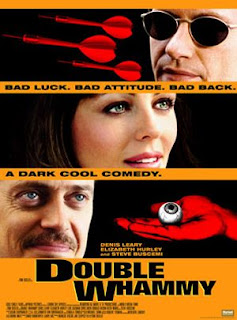