October 14, 2013
I’ve been using Norelco rotary head shavers for most of my life.  Of course, when I started shaving, I used a double edged blade like most others of my ilk.  I started shaving in the early 1960‘s, so that will sort of give you a time-stamp reference.  I did discover, however, that I really carved myself up with a blade, so I made the switch to electric.

The hot deal when I was a teen-ager was Norelco rotary head shavers, so that was the ticket for me.  I had a job and income, so I bought one in 1967.  A dual head shaver.  It had a flip-top for ease of cleaning, a handy pouch to carry it around, and it was battery operated.  It used 4 penlight batteries.

What??  Never heard of a penlight battery?  No idea at all?  OK then, we’ll talk batteries for a little while.  “Flashlight batteries” were what we called flashlight batteries back then.  In today’sworld, the cool kids call them “D” cells.  Smaller batteries were called “penlight” batteries, and that’s what you asked for at the Western Auto store--which, by the way, was where you bought batteries.  They were skinny little guys, and they might have been what are now known as “AA” or maybe “AAA”.  Life was much less complicated when you could just go to the hardware section of Western Auto and ask the guy behind the counter (who wore a brightly colored vest, a white shirt, and a bow tie) for some penlight batteries.

And, now, back to our feature.....I paid $14.95 for that little beauty.  Just before I joined the Army in 1968, I bought a second double header by Norelco, but it had to be plugged into an outlet (I had no idea if the Army PX would have penlight batteries, inasmuch as I’d always bought mine at Western Auto, and I didn’t figure that the Army would have a Western Auto.  I was right about the Army not having a Western Auto).  The second one ran me $19.95 I think.  Those two Norelcos got me through my Army years and beyond.  In 1968, Norelco had just introduced a “triple head” model which ran a cool $39.95.....Way beyond my ability to buy.

My current Norelco floating-head triple-header is dying, so I’ve begun the arduous task of finding a suitable replacement.

A couple of hundred bucks now seems more or less OK to me. 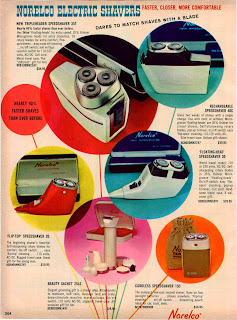