August 15, 2013
No question about it.  When I have time on my hands, I watch an absolute crap-load of movies on television.  Not really “television” movies, although I have nothing against them as a genre.  I’m just not that sophisticated.  Plus, like I have frequently said, I’m not a critic.....I’m a fan.

On Netflix, via my ROKU box delivered through the wireless home network into the 46 inch high definition wide screen Vizio (I may not have mentioned this before, but this is a “smart” TV--probably smarter than me in many respects), I watched a modern dark comedy drama thriller film noir from 2005 starring John Cusack, Billy Bob Thornton, and Oliver Platt called The Ice Harvest.

Dandy story here--way too much plot to run down here, but suffice it to say that if you liked movies like Get Shorty, Fargo, The Whole 9 Yards, and Pulp Fiction you’ll most likely like this one too.  If you like books like The Four Corners of Night by Craig Holden you might just like this movie.  If you like the idea of an R rated Christmas movie, you might like this.  If you’re into titty bars, mobsters in Kansas, and winter driving you’re REALLY going to like this.

I liked it a lot.

We got that liberal Irish-American Illinois product John Cusack as the mob lawyer who decides to rip off the mob for a coupe of million bucks.  Maybe not his best idea, if you know what I mean and I think you do.

Then we got the frequently tattooed Arkansas native and product of a union between a high school history teacher (dad) and a psychic (mom) William Robert Thornton-----but you can call him Billy Bob-----as the mob lawyer’s partner in crime.  Billy Bob has been married 5 times and was once hospitalized for malnutrition.  Billy Bob was considered for the title role of Forrest Gump--tough luck on the Gump role Billy Bob.

Next we got Oliver Platt as the mob lawyer’s side-kick and current husband of the mob lawyer’s ex-wife.  Don’t worry, it makes sense as the movie plays out.  Oliver’s been all over the place for a pretty good while (West Wing, Nip Tuck, etc.), but for me, he will always be Hector the crocodile hunter in Lake Placid.

Lots of other dandy performances in this movie.  A genuine don’t-miss.  It’s now going to be part of my permanent Christmas line-up right along with Holiday Inn, Elf, and my personal copy of the 1978 Star Wars Holiday Special. 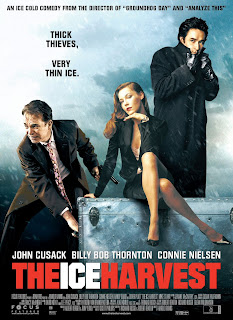