It's been cold in Northeast Ohio. Night comes early in the winter, you know, and that can only mean one thing.........

Today's Ed Wood classic is that 1956 favorite, The Violent Years. Not very much story to get in the way of the violence, such as it is, and the preaching, such as it is.

All girl gang of, well, girls, get involved in delinquency, burglary, raping a boy (!), armed robbery, pistol-whipping, shoot-outs with the police, fatal car crashes. Man-Oh-Man, a lot of stuff there considering the movie is under an hour. The preaching comes near the end of the flick when the judge reads the riot act to the main bad girl's parents.

There you have it. Nihilistic girls. Equal opportunity crime. This movie is notable for a couple of really good reasons:

-Ed Wood was only involved in a couple of movies that actually made money, and this is one of them. If all that you know about Ed Wood (a cross-dressing Marine Corps WWII veteran) is what you learned from Johnny Depp and Plan 9 From Outer Space, then this is your chance to see what he actually did. In the movies, I mean. His sexual identity problems are evident everywhere—in this movie, for example, he named the four gang-girls Paula, Georgia, Geraldine, and Phyllis. OK, fine. I'll spell it out for you. They could JUST AS EASILY HAVE BEEN BOY'S NAMES.

-The actress who plays the main bad girl (Paula, if you're keeping score) is the appropriately named Jean Moorhead, whose main claim to fame was her appearance as the October 1955 Playmate of the Month in Playboy magazine. Huzzah, Jean. In the movie, she's also the one who rapes the boy and gets herself knocked up as a result.

OK, then, to review.....If you're a gang-girl, don't rape a boy 'cause you'll get in shoot-outs with the police and get pregnant. 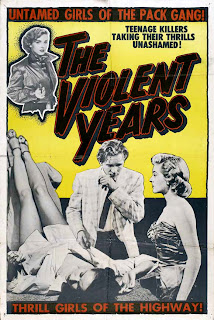