February 04, 2017
In other news, I noticed a new zombie-comedy being touted on Netflix—A made for Netflix thing starring Drew Barrymore and Timothy Olyphant, two of my favorites. It's called The Santa Clarita Diet, and the run-up inferred that Drew was going to be a zombie and Timothy was going to be her husband, living a normal life in the El Lay 'Burbs when Drew turns into a zombie and hilarity ensues. I was ready.

It's funny enough, but it's no iZombie (although that what it seems to want to be). Good enough to have me watch at least one episode beyond the pilot.

Here's my problem with it………..It's the identical problem I have with just about every Made-For-Netflix series in their current offerings:

The only couple that isn't bi-racial is Drew and Timothy. At least in the one episode I saw. They live in the 'Burbs. Santa Clarita. I've been to Santa Clarita more than once and I'm here to tell you that most of the couples living there are not bi or multi racial. I get it that we're being all inclusive and such, but, really……….Our main characters have two next-door neighbor couples, which is pretty normal for the 'Burbs of El Lay. On one side they have a nosy Mexican deputy sheriff married to a Caucasian woman. On the other side they have a Black motorcycle riding reckless driving city policeman with a chinstrap beard and his Oriental wife. The clerk at the hardware store is a disinterested Oriental girl named Ramona. Drew and Timothy are a husband-and-wife real estate team and the only couple that they showed a house to was a white guy and his black wife.

And that is my on-going problem with Netflix. We’ll see how it goes.

In the "for whatever it's worth" department, city-data.com stats show that, in 2015, households consisting of 2 or more races in Santa Clarita comprised a whopping 3.4% of the population.

And then there's this--Cops who live in the 'Burbs actually try to just fit in, rather than stand out. Once again, something I know a little bit about. On the other hand, their take on cops and cops' behavior is just about as accurate as their take on the racial make-up of suburban couples.

I’m no racist, but I'm already tired of this shit. 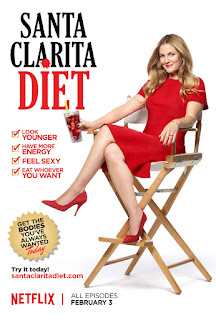