It's been cold, snowy, foggy, and rainy here in The Land Of Perpetual Rainfall. Then there's that thing where I work. I work as a part-time security guy at the local community college. Part-time because if I work over 75 hours in any given month the state of Washington requires that the IHL (Institution of Higher Learnin') supply me with benefits—remember benefits? I do. Medical, dental, sick leave, snow days (yes, the full-timers at the IHL get “snow” days). It's just too dangerous for the full-timers to get to work on snowy days, but the security department must still be staffed, so, well, you get the picture….I feel no need to spell it out any further.

Anyhow, I reached the magical 75 hour mark early this month mostly because SOMEBODY had to work on all those snowy days. So, I've been watching some old movies on the 48 inch wide screen high definition TV. I have a working home WIFI system courtesy of the cable company-supplied modem and my very own router. And attached to the aforementioned TV, I have an Android TV box and a ROKU box.

Life is good. The video and digital worlds are my oysters. And I do enjoy me some oysters.

From the mid-70s I watched a grand movie entitled “Lifeguard”. A better hour and a half you will never spend. This movie was much better than it needed to be as far as I was concerned, Sam Elliott at his studly best and endless girls in bikinis on the El Lay beach (well, technically it was Torrance, but Torrance is part of the greater El Lay beach scene….At least it was in 1976). That alone would have been plenty for me, but they went ahead and wrote a fine story, and an equally fine score, and equally fine directing, and equally fine…….This is now one of My Favorite Movies Ever.

We got the one and only Sam Elliott as the Lifeguard. Yes, he has a mustache. Like you didn't know. But, he also drives a green Sting Ray, like all studly lifeguards of that era drove. Thing is, it was 1976, and life in these United States was different. A lifeguard could actually buy a Corvette on his salary. It was before California became The People's Republic of California.

California. 1976. Sand and Sea. Life was better. The girls were prettier. The beach was cleaner. The surfers were friendlier. The cars were faster. Men had great hair and mustaches. This movie shows 50 or 60 square miles of exposed flesh and I saw not a single tattoo. NOT ONE!!!!! Even the sharks kept their distance.

Life was better in the mid-70s in California. I know. I was there too. With a mustache.

The plot isn't too much to bear. Our lifeguard has a life crisis after he goes to his 15 year class reunion, and he has to decide if he should give up the beach in favor of a regular job and his high-school sweetheart. Nope, I won't tell. You'll just have to watch the movie.  The lifeguard's name is Rick, and in his apartment he has, among other period pieces, a wall poster of "The Endless Summer", another movie worth the time spent.

A couple of the girls worth mentioning here are, as Wendy (like you didn't know there would be a Wendy), the 20 year old version of Kathleen Quinlan. You’ll recognize her at once. As the high school sweetheart, I give you none other than Anne Archer. You'll know her too. As the Lifeguard's young protege, we got Parker Stevenson who later became Craig on Baywatch. Worked out OK for him, dontcha think?

Everybody involved is first rate, and like I said, this is California in the mid-70s.

If only I had a time machine……….I didn't know then how spectacular life was, but in retrospect I surely do. 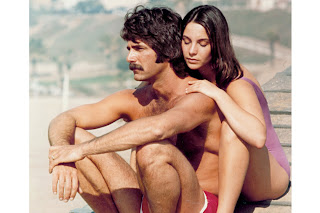