I’ve recently re-located from NorthEast Ohio (the Rust Belt) to the Pacific NorthWest (HippieFornia). I live in Vancouver, Washington where living is reasonable--no state income tax, a winning football team in Seattle, and legal marijuana.

Not that I partake, which I don’t. I know, I know.....I was a teenager in the 60s and we were all supposed to be reefer-puffers from birth. I know, I know.....I enlisted in the Army in the 60s too, and we were all supposed to be addicts. That’s right children--I enlisted of my own free will during a time of anti-war protests and the SDS and all that nonsense. No draft-dodging for this kid. I did it because one of us had to, and the protesters didn't have the heart, spine, sense of duty, courage, or love of country.

I received my Honorable discharge from the United States Army in 1971 and left the active service of my country carrying the rank of Sergeant and the thanks of a grateful nation. One other really cool thing that happened in 1971 was the release of a movie titled The Hard Ride, which I recently watched courtesy of my Netflix account, fed through my Beloved ROKU box into the wide-screen high-definition 32 inch Sceptre TV, all made possible with the cooperation of the Xfinity home wireless network, which was working flawlessly for the duration of the film.

When I lived in the Rust Belt, I had a larger home--and a larger TV. I've downsized. Life is good. In 32 inch WS HD glory.

There’s not a whole lot of plot to get in the way of the long motorcycle rides, scenic wonder of Yosemite and the central California coastline, and the occasional nekkid titty. Vietnam hero returns to buddy’s hometown to bury him and grant his last wish of having certain people at the funeral. Kind-hearted hero falls for buddy’s girl and runs afoul of evil bikers. We get some lessons in the isms of the day--racism and sexism--along the way. Kind-hearted hero dies in the final scenes (shot by a nasty biker--hope I didn't spoil it for anyone) and is buried next to his Vietnam war buddy. Fade to patriotic finale.

The music that permeated all movies of the late 60s and early 70s is in full swing, and a soundtrack record was released. The opening song was performed by Bill Medley. No, that's not an alias. He was one of The Righteous Brothers. Fine.....Google it then.

As the male lead, and Vietnam war hero, we got Troy, New York native and Budweiser Malt Liquor spokesman Robert Fuller. When he was born, his dance instructor parents named him Buddy Lee. A fine handle if you ask me, but Bob Fuller is pretty good too. In real life he was a Korean war veteran, which explains why he looked so doggone good in his uniform in this movie. He went on to fame and fortune in Wagon Train and Emergency. A good guy all the way around.

The female lead and love interest was played by El Lay native Sherry Bain, a raven-haired beauty and absolute hottie who looked quite natural on the back of the chopper featured in this movie. Sherry also starred in 1971s “The Wild Riders”. It was a motorcycle year for Sherry. Her filmography starts abruptly in 1971 and ends just as abruptly in 1978. A true 70s sensation.

This is a real “don't miss” if you want to see a biker movie with a message, but without the sleaze. Wouldn't hurt if you liked the 1970s.

Have a look. You won't regret it. On Netflix. 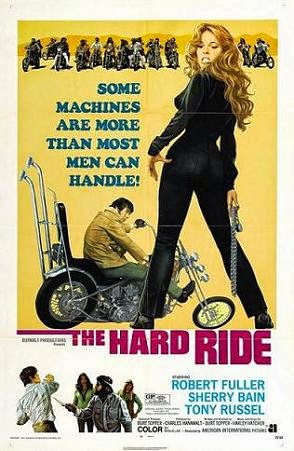