December 25, 2013
It’s Christmas Eve, and it’s snowing--absolutely beautiful, I tell you.  Oh, and it’s 19 degrees, the temperature is falling, and then there’s the wind chill.  I have a couple of hours on my hands before My Bride and I head off to an open house, and this can only mean one thing....

Our feature today, courtesy of PubDHub.info, my beloved ROKU box, the Internet and my secure, wireless home network, and that dandy 46 inch High Definition Wide Screen is that 1945 jungle thriller, The White Gorilla.

Seems that one gorilla was born white and was cast out by the black gorillas, making him an ornery cuss.  A renegade, if you will.  He’s white and he’s pissed.  Quite a take on the white/black black/white issue considering that this is 1945, dontcha think?

Sorry, but that’s about it.  Absolutely no story to get in the way of the jungle animal scenes, filler material re-used from a silent 1927 serial called Perils of the Jungle, the occasional glimpses of a Cyclops in a cave, and a 6 year old white jungle boy who packs a bow & arrow and has a way with animals.  The white gorilla dies in the end after a battle scene with a black gorilla.....No, the black gorilla didn't kill the white gorilla.  A hunter did the deed.  There’s a damsel to be saved mixed into this thing too.

The damsel was portrayed by none other than that Flint Michigan Rodeo Queen, Lorraine Miller.  When she graduated from high school in Flint in 1940, and became the Rodeo Queen, she moved on to Hollywood.  Why, you ask?  Because the prize for being crowned Rodeo Queen in Flint, Michigan in 1940 was an MGM contract.  No, I’m not kidding.  MGM had her housed in their Studio Club where she roomed with Donna Reed.  No, I’m still not kidding.  She was a knock-out and was compared (at the time) to Rita Hayworth.  She died in El Lay in 1978 at the tender age of 56.  She acted in a number of forgettables in the 1940s and 1950s, and once appeared on The Donna Reed Show in 1960.

The narrator of this stinker (and the guy who wore the ape suit) was Milwaukee, Wisconsin product Ray Corrigan, mostly known for rough and tumble parts and such in the 30s, 40s, and 50s.  When his acting days were over, he ran a number of businesses, one of which was “Corriganville” in Simi Valley where many westerns were filmed--and was later re-named Hopetown when Bob Hope bought it.  It was just down the street (sort of) from the Spahn Movie Ranch which was later the home of the infamous Manson family.

So there you have it.....Guy in a monkey suit, boy in a jungle suit, starlet at the height of her beauty, Manson family tie-in.

Not much to recommend it, but it’s only 61 minutes long, and it’s free to watch.  Not a complete waste of time, if only for the guy in the monkey suit-- 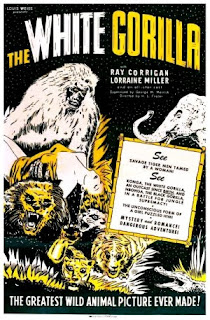